The review of instances of “Aslama” confirms that people are invited to submit to the will of God and obey His law to become a submitter while the review of instances of “Islaam” confirms that submission (Islam) is a religion given by God and He will not accept from anyone other than submission. Whoever He wishes to guide, he opens his heart to it and whoever opens his heart to it will be on a light from Him. However, here is the review of instances of “Islaam” and “Muslim” in the Quran for clear understanding of the relation between submission and submitter taught by God to find the right path for us and stay in it along with the verses frequently referred as support to understand that those who meet certain requirements mentioned in the Quran will receive their recompense from God:

[3:19] Indeed, the religion with God is Submission (al-islaamu), and those who received the scripture did not dispute except after the knowledge came to them out of jealousy between them. And whoever rejects God’s revelations, then God is swift in reckoning.

[3:85] And whoever seeks other than Submission (al-islaami) as a religion, will not be accepted from him, and in the Hereafter he will be with the losers.

[6:125] So whoever God wishes to guide, He will open his chest to Submission (lilislaami); and whoever He wishes to misguide, He will make his chest tight and constricted, as one who is climbing towards the sky. It is such that God afflicts those who do not believe.

[9:74] They swear by God that they did not say, while they said a word of disbelief and they disbelieved after their Submission (islaamihim), and they planned of what they could not attain; and they could not take revenge except that God and His messenger had enriched them from His bounty. If they repent, it will be better for them, but if they turn away, then God will punish them a painful punishment in this world and the Hereafter, and they will have no protector nor a helper in the earth.

[39:22] Is he whom God has expanded his chest to Submission (lilislaami) that he is on a light from his Lord? So woe to the hardened – their hearts from remembering God. Those are in far astray.

[49:17] They consider a favor to you (Muhammad) that they have submitted. Say, “Do not consider your Submission (islaamakum) a favor on me. No, God has bestowed a favor upon you that He has guided you to the faith, if you are truthful.”

[61:7] And who is more evil than one who has invented lies about God, while he is invited to Submission (al-islaami)? And God does not guide the evil people.

[2:128] “Our Lord, and make us (both) submitters (mus’limayni) to You, and from our descendants a submissive (mus’limatan) community to You. And show us our rites and turn to us. Indeed, You are the Redeemer, the Most Merciful.
Note: This verse has 1 instance of “Muslim” in the masculine dual noun form translated to submitters and 1 instance of “Muslimatan” in the feminine adjective form translated to submissive.

[2:132] And Abraham enjoined his sons and Jacob with it: “O my sons, God has chosen the religion for you, so you should not die except while you are submitters (mus’limoona).”

[2:133] Or had you been witness when the death came to Jacob, when he said to his sons, “What will you worship of after me?” They said, “We will worship your god; god of your fathers Abraham, Ismail, and Isaac- one god, and to Him we are submitters (mus’limoona).”

[3:52] Then when Jesus perceived the disbelief, he said, “Who are my supporters towards God?” The disciples said, “We are God’s supporters, we have believed in God and bear witness with that we are submitters (mus’limoona).”

[3:64] Say: “O people of the scripture, come to a fair word between us and you that we do not worship except God, nor do we associate anyhing with Him, nor do we take each other as lords other than God.” Then if they have turned away, then say: “You shall bear witness with that we are submitters (mus’limoona).”

[3:67] Abraham had neither been a Jew nor a Christian, but he had been a true submitter (mus’liman), and he had not been with the idol worshipers.

[3:80] Nor can he order you that you take the angels and the prophets as lords. Can he order you in the disbelief after when you are submitters (mus’limuuna)?

[3:102] O you who believe, you shall honor God as He should be honored, and do not die except when you are submitters (mus’limoona).

[5:111] And when I inspired the disciples that you shall believe in Me and My messenger; they said: “We believe, and bear witness that surely, we are submitters (mus’limoona).”

[6:163] He has no partner, and in that I was commanded, and I am the first of the submitters (al-mus’limeena).

[7:126] And you cannot persecute us just for that we believed in the proofs of our Lord’s when they came to us. “Our Lord, bestow patience upon us and let us die as submitters (mus’limeena).”

[10:72] “But if you turn away, then I have not asked you any reward while my reward is only with God. And I have been commanded that I am with the submitters (al-mus’limeena).”

[11:14] Then if they do not respond to you, then know that it was sent down with God’s knowledge, and that there is no other god except He. Then will you be submitters (mus’limoona)?

[12:101] “My Lord, you have given me authority, and taught me the interpretationof the events. Initiator of the heavens and the earth, you are my Protector in this world and the Hereafter. Let me die as a submitter (mus’liman) and join me with the righteous.”
Note: The instance of “Musliman” in the masculine noun translated to submitter to reflect the message.

[15:2] Maybe those who disbelieved will wish that they were submitters (mus’limeena).

[16:89] And the day we will raise a witness in every community from among themselves, and bring you as a witness of these people. And we sent down the scripture to you as a clarification of everything, and a guidance and mercy and good news for the submitters (lil’mus’limeena).

[16:102] Say, “The Holy Spirit (Gabriel) has brought it (Quran) down with the truth from your Lord to strengthen those who believe, and as a guidance and good news for the submitters (lil’mua’limeena).”

[22:78] And you shall strive in the cause of God as you should strive for His cause. He has chosen you and has placed no hardship on you in the religion – the religionof your father Abraham. He named you the submitters (al-mus’limeena) from before and in this, that the messenger may be a witness among you, and you may be witnesses among the people. So, you shall observe the Contact Prayer (Salat) and give the obligatory charity (Zakat), and hold fast to God; He is your Protector, the best Protector and the best Supporter.

[27:42] So when she came, it was said: “Is your throne like this?” She said: “It is like as it were.” “And we were given the knowledge before her, and we have been submitters (mus’limeena).”

[27:81] Nor can you guide the blind out from their misguidance, nor can you make hear except those who believe in our revelations and they are submitters (mus’limoona).

[28:53] And when it is recited to them, they will say, “We believe in it. Indeed, it is the truth from our Lord. Even, we were submitters (mus’limeena) before it.”

[30:53] Nor can you guide the blind out from their misguidance, nor can you make hear except those who believe in our revelations and they are submitters (mus’limoona).

[41:33] And who is better in utterance than one who invites to God, does righteousness, and says, “Indeed, I am one of the submitters (al-mus’limeena)?”

[43:69] Those who believed in our revelations, and they were submitters (mus’limeena).

[46:15] And we enjoined the human being to honor his parents. His mother bore him with hardship and gave birth to him in hardship. His bearing and weaning is until thirty months. When he reaches his maturity and reaches forty years, he says: “My Lord, direct me to appreciate the blessings You have bestowed upon me and upon my parents, and to do the righteous works that please You. And make my children be righteous as well. Indeed, I have repented to You, and indeed, I am one of the submitters (al-mus’limeena).”

[66:5] If he (Muhammad) divorces you (his wives), his Lord will substitute other wives in your place who are better than you: submissive (muslimaatin), believing, obedient, repentant, worshiping, fasting, either previously married, or virgins.
Note: The instance of “muslimaatin” in the feminine adjective is translated to submissive.

[68:35] Then shall we treat the Submitters (al-mus’limeena) like the criminals?

Here is the summary where the occurrences of “Muslim” found that teach us to understand the behavior of a submitter who does righteous works to be eligible for the recompense from God: 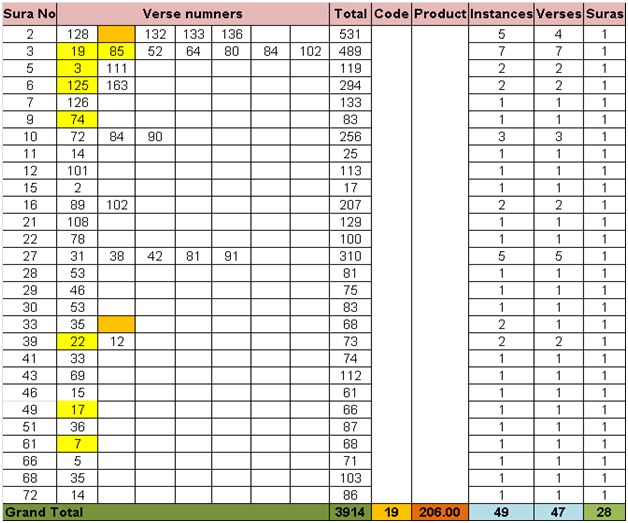 Note: This mathematical interpretation from the 4 verses including the instance of “Musliman” in 3:67 in the adjective form is a high level confirmation that people of all periods of guidance are to believe, recognize and uphold God’s words as well as to meet certain requirements to receive their recompense from their Lord while it doesn’t matter what they called their religion or the communities.

Abraham together with his son asked God to make them submitters to Him and a community of submitters from their descendants. Jacob enjoyed his children not to die without being submitters and asked them to worship one god to become submitters.Joseph prayed to his Lord to let him die as a submitter and join with the righteous. Moses said his people to believe in God and trust on Him if they were submitters. The disciples of Jesus who supported him were the submitters. Muhammad was inspired not to associate partners with God and was commanded to be the first of the submitters and to worship the Lord of the city and Possessor of what is in the heavens and in the earth.

God and His allies invite people to become a submitter using His source while the Satan and his allies also do the same but using the different source, i.e., man-made source. Now the choice is ours to shop which would be good for us. This review accompanied mathematical confirmations may serve as diffusion analysis to better understand that believing in God and His messenger as well as recognizing and upholding His words in each divine message given to the people of the respective period of guidance while Quran, the confirming and consolidating as well as the final message is given us to achieve the goal of becoming submitters to God to be eligible for recompose from Him.
Peaceful Friday, salaam and God bless.
Tafazzal (11/17/2017)