The precise number of religions in the world is not known, but available estimates show the number to be about 4,300, according to Adherents.com. As of 2010, Christianity, Islam, Hinduism and Buddhism are some of the most widespread religions in the world, in terms of global population percentage. Folk religions and other religions such as Judaism make up a smaller percentage of the population. While Christianity and Islam are the two largest religious groups in the world, the third-largest group comprises of people who consider them to be religiously unaffiliated. Folk religions, which make up 5.9 percent of the global population, include followers of traditional African religions, Chinese, Native American and Aboriginal Australian religions. Baha’i, Sikhism, Shintoism, Taoism and other small religions around the world, make up 0.8 percent of the population.

It is an unfortunate fact that innovations, traditions, politics and false doctrines corrupt any religion over time one way or another. Most people are happy with following the footsteps of their parents blindly. They are comfortable with following the majority and going along with the crowd gives them a sense of security. They contemplate: how could millions or billions of people be wrong? However, there are people who realize the corruptions in the religions. They recognize that they have been taught certain things that do not make sense. They start looking for answers. Some turn to others whom they think have the answers for them. But eventually such people will want to reassure their hearts. How can they know or trust if the answers given to them are correct?

Is it possible to let go of one wrong, and adopt another equally detrimental one for our salvation? Of course, this is entirely possible unless we put our trust in God and do what is best. So what should we do? The solution is to study and learn God’s message directly from His scripture. Therefore, one should go to the source of the religion.

The best way to learn about a religion is to read critically the scripture it is based on. If there is something in the scripture that does not make sense, it cannot be from God. There has to be some logical explanation where the information comes from and why it does not make sense. We may ask ourselves several questions. Where do we find a scripture that we know for sure is from God in its entirety, and exists in its original language? What is the origin of the scripture? If it is a scripture translated from the original, is the translation correct? Are there other translations that give different meaning? Is there such a scripture? The answer is yes, the Quran, the final version of God’s scripture to humanity.

Its collection as well as its written and oral transmission keep it intact without any possibility of missing a minute piece from it along with divine attestation of preserving it. However, this is not enough to spare those who follow this scripture from corrupting their religion. Unfortunately the interpretation of its verses based on other sources plagued them (Muslims) en masse. So they also turned their religion into something against God’s teachings.

It almost seems hopeless to find a religion in its pure form. Should we then despair, or is it really possible to sort through the interpretation of the scholars and look into what God is really telling us? Yes, it is. Those who can read the Arabic may appreciate the excellence of the literature of the Quran but those who do not know the Arabic, may appreciate the excellence of the message by reading the Quran in any language keeping in mind that God guarantees the message in the Arabic Quran. Since understanding of God’s teachings and laws in the Quran is the priority, having the Quran in an Arabic or non-Arabic book may not make a difference but in case of any misinterpretation, disputes or discrepancies in any translation or across the translations must be addressed to make an inquiry into the Arabic Quran.

Quran has the right answers

[2:130] And who turns away from a religion of Abraham except whoever has fooled himself? And certainly, we have chosen him in the world, and indeed, he is in the Hereafter surely, will be with the righteous.
[4:125] And who has better religion than one who has submitted himself to God, and he is a good-doer and has followed a religion of Abraham, monotheism? And God has chosen Abraham as a friend.
[22:78] And you all shall strive in the cause of God as you should strive for His cause. He has chosen you and has placed no hardship on you in the religion – the religion of your father Abraham. He named you submitters from before and in this that the messenger may be a witness among you, and you may be witnesses among the people. So, you shall observe the Contact Prayer (Salat) and give the obligatory charity (Zakat), and hold fast to God; He is your Protector, the best Protector and the best Supporter.
[42:13] He decreed for all of you the religion what He enjoined for Noah, and what we inspired to you (Muhammad), and what we enjoined for Abraham, Moses, and Jesus. That you shall uphold the religion, and you are not to divide in it, is difficult for the idolaters what you (Muhammad) call them to it. God chooses to Himself whomever He wills and He guides to Himself whoever turns.

[3:19] The religion with God is Submission, and those who received the scripture did not dispute except after the knowledge came to them out of jealousy between them. And whoever rejects God’s revelations, then God is swift in reckoning.
[3:83] Do they seek other than God’s religion while whatever in the heavens and the earth have submitted to Him willingly or unwillingly? And to Him they will be returned.
[3:85] And whoever seeks other than Submission as a religion, will not be accepted from him, and in the Hereafter he will be with the losers.

However, the religion of Islam (Submission) has also been severely corrupted with man-made doctrines, innovations and traditions while the Quran is the only valid and divine source of religious laws and guidance for the people of the world. Thus, what the different sects follow today has nothing to do with the Islam as preached by God’s messengers. Whatever they practice is corrupted versions of Islam. However, the extent to which Islam (Submission) has been corrupted as illustrated in the table below is just a snapshot of them. 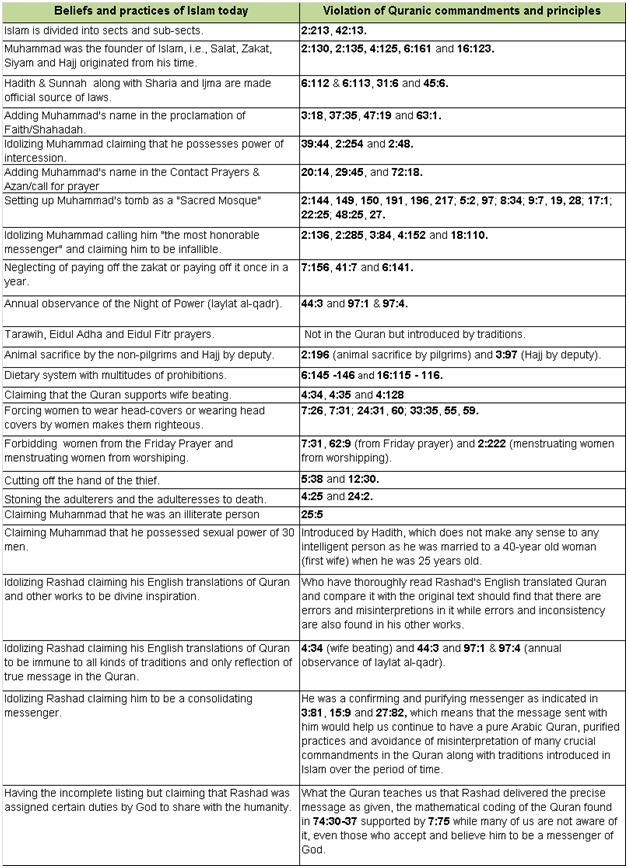 Note: This is only a minute sample of the violations committed by the traditional as well as new generation Muslims on a daily basis.

God is aware that the humanity would be in such a situation. Thus, when He sent down the Quran, the last reminder for the world, has made certain promise and prophecies in it that are destined to fulfill at the right time to guide the humanity in the right direction. The prophecy in the Quran to send a messenger after delivering all the scriptures has been fulfilled in 1974 followed by the fulfillment of the prophecy to produce an earthly creature, i.e., the computer that has intelligence to compute most accurate calculations faster than human being. Through the fulfillment of the related prophecies, the mathematical coding of the Quran (Quran 74:30-37) has been unveiled by God’s leave to bring people back to His revelations presenting physical proofs as well as to guard every aspect of the revealed Quran against any human intervention to continue to exist a pure Quran until the end of the world. If we understand that there is no coincidence when God is concern, then whatever takes place has taken place according to His master plan, and it would help us find the right way to lead a righteous life exposing and eliminating all the corruptions from the beliefs and practices as occurred.

There are many religions/faiths in the world while God has given us the religion of Islam. But His religion has been severely corrupted with man-made doctrines, innovations, traditions and misinterpretation of the verses of the Quran. The extent to which Islam has been corrupted as illustrated in the above table is just a snapshot. The different sects/sub-sects that they follow today is not the true Islam as prescribed in the Quran. Such practices have created corrupted versions of Islam but each group claims them to be in the right path, even the terrorists around the world claim that they follow the true Islam.

Thus, the religion of Islam continues to grow with corrupt versions of it around the world. The reason for this is the fact that the majority Muslim people, scholars, organizations and countries do not act or function, according to the teachings of the Quran. However, it is a very easy religion to practice, which makes all the sense in the world to prepare our life for the Hereafter.

Today, we do not assume, as we did in the past when the printed text was the critical medium determining knowledge creation and distribution. New technologies cheaply provide a large amount of knowledge to the global community and at the same time maintain the malleability of information and the possibility of contribution by all. The trick for citizens in the Information Age is to be able to decide on the justifiability of the believed truth, just as their counterparts did in the Age of Orality. Information is now not bound by the physical restrictions of printed texts, nor is access to information limited by geographical or temporal boundaries. Cyberspace immeasurably extends possibilities for storage and transmission of information, and access to it. Thus, with the communication technologies that affect our creation, transmission, and storage of knowledge, is to continue to be changes in our conceptualization of knowledge.

Now we live in an age of reason and not of blind faith. One should not just rely on the religious background passed on through parents or the society alone. There is no doubt that our knowledge is limited but still we have the opportunity to explore God’s religion to understand it better. Thus, we may advance believing and accepting the truth upon verification or we may stay behind due to our doubt and disbelief.

The Quran has been revealed in the days of ignorance clarifying all wisdom in it through Muhammad and there is mention of mistakes in it made by him. While the mathematical coding of it was unveiled in the highest height of human civilization through Rashad by God’s leave and He has let us know the mistakes made by him as well. The mathematical coding is a very efficient tool that provides us with an opportunity to physically confirm the details of the religious rites, commandments and laws to eliminate any traces of doubts from our hearts. Thus, the Quran is so efficient to find the truth and lead a righteous life without idolizing the prophet and the messenger. What we need to have a sincere drive to make our journey simple and easy by understanding God’s religion as dictated by Him in the Quran and follow what makes sense to us fitting to the generation we are living now.
Peaceful Friday, salaam and God bless.
Tafazzal (6/23/2017)