The Quran is characterized by a unique phenomenon never found in any other book. Its 29 suras prefixed with 14 sets of Quranic initials consisting of 1 to 5 Arabic letters per set. The 14 letters of the Arabic alphabet constitute these 14 sets of Quranic Initials. However, there is no meaning of these initials except mysterious letters to traditional Muslim scholars, and they do not accept their meaning what is known to many of us today through sincere and detailed study of the Quran. 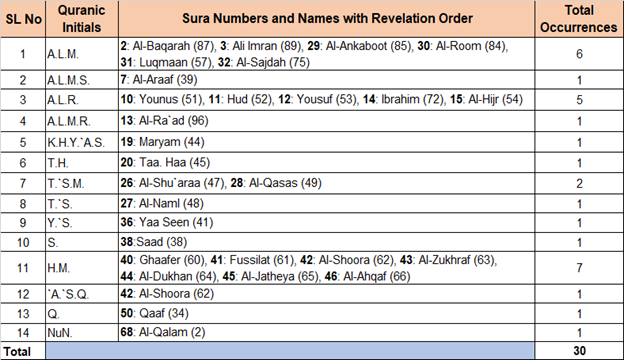 It is noteworthy that the sura 42: Al-Shooraa is prefixed with 2 sets of initials: 1. H.M; 2. ‘A.’S.Q, the initial N is spelled out to represent two Ns in the sura 68: Al-Qalam and the two forms of Haa- closed and open represent in the initials. If you add the data in the total column in the above table, you will get 30 instead of 29 as the sura 42: Al-Shooraa is repeated twice because of 2 sets of initials.

The Quranic Initials constitute a major portion of the Quran’s 19-based mathematical miracles. Here are some significant roles of these initials that are revealed with the discovery of 19-based built in mathematical system in the Quran in 1974:

Let us examine the initials as well as the verses that are placed immediately after these initials in 29 suras to understand what God has taught us in the literary Quran through these verses:

Notes:
(1) Per chronological order of the revelation of the Quran, the first occurrence of ALM is found in sura 31: Luqman wherein the 2nd verse refers to the 1st verse indicating a set of signs of the scripture, the wise. Then God has used this set of initials in the subsequent revelations expecting from us that we will reflect on this significance to give appropriate importance on the verses placed immediately after this set of Quranic initials as well as the sura as a whole for dealing with the crucial and unusual events.
(2) The other important messages that immediately follow this set of initials are: a. this book, a revelation from God is a guidance for the believers to become righteous as there is no doubt in it, b. there is no god besides God, c. a prophecy on the future defeat of the Romans, d. the people must go through test to prove them believers and e. this set is a gateway between specific words and words of guidance given by God.

ALMS
[7:1] Alif.Laam.Meem.Saad.
[7:2] A scripture has been revealed to you that there should not be any discomfort in your chest from it that you may warn with it, and a reminder for the believers.
Note: This set of initials i.e., ALMS is an extension of ALM. The commandment that follows this set of initials is a reminder for the believers to strengthen their heart including the heart of the message bearer not harboring any doubt about the scripture to be the revelation of God. Now we can easily realize that how much strength is needed in our heart to believe and follow the scripture. We may also reflect on the crucial event relating to Adam and Eve who were sent down on earth for redemption of their sin (including ours) when they were duped by the Satan and asked for God’s forgiveness (7:20-24).

ALR
[10:1] Alif.Laam.Ra. That is of signs of the book, the wise. [til’ka aayaatu al-kitaabi al-hakeemi]
[10:2] Has it been a wonder for the people that we have revealed to a man from them that you shall warn the people and shall give good news to those who have believed that for them there is an honorable position at their Lord?. The disbelievers said, “Indeed, this is surely a clear magician!”

[11:1] Alif.Laam.Ra. A scripture has been perfected, then has been explained in detail from Wise, Cognizant.
[11:2] That you are not to worship except God. I (Muhammad) am to you from Him a warner and a bearer of good news.

[12:1] Alif.Laam.Ra. That is of signs of the scripture, the clear [til’ka aayaatu al-kitaabi al-mubeeni].
[12:2] Indeed, we have revealed it an Arabic Quran that you may understand.

[14:1] Alif.Laam.Ra. A scripture, we have revealed to you (Muhammad) that you may bring the people out of the darkness into the light with permission of their Lord to a path of the Almighty, the Praiseworthy.
[14:2] God is the One who to Him belongs what is in the heavens and what is the earth. Woe to the disbelievers for the severe punishment.

Note: This set, ALR has repeatedly informed us being a sign of this profound scripture confirming that it is an Arabic Quran wherein the divine teachings have been perfected and clearly explained in order to lead the people out of darkness into the light, and we must worship God alone but the disbelievers will also wish that they are submitters.

ALMR
[13:1] Alif.Laam.Meem.Ra. That is of signs of the scripture [til’ka aayaatu al-kitaabi]. And that which has been revealed to you from your Lord is the truth, but most of the people do not believe.
[13:2] God is the One who has raised the heavens without pillars that you can see, then He has established (Himself) on the Throne, and has subjected the sun and the moon, each running for an appointed term. He manages the matter and details out the revelations, that you may ascertain in the meeting of your Lord.
Note: The ALMR set of initials is also an extension of ALM, which directly indicates that this set is a sign of this scripture. It confirms the message that the truth has come in this scripture but the tragedy is that most people will not believe informing us to reflect on the creation of the seven heavens as created without pillars.

KHY`AS
[19:1] Kaf.Ha.Ya.`Ayn.Saad.
[19:2] Here is a mention of your Lord’s mercy to His servant, Zachariah.
[19:3] When he called his Lord, a secret call.
Note: God responded to the secret call of Zachariah. He gave him a sign not to speak to his family that He is going to fix them to have a son because of their old age and his wife’s sterility as well. Gabriel visited to virgin Mary to give her good news to be a mother of a son. The Jesus birth is a portent for the whole world and he spoke as a new born.

TH
[20:1] Ta.Ha.
[20:2] We have not revealed the Quran to you that you may distress.
Note: This set of initials confirms that the Quran is our guidance to lead us to the right path and there is no way it can cause any hardship to those who sincerely study and follow it.

Note: This set is an extension of T.`S and both the occurrences of this set confirm that this set is a sign of the scripture, the clear.

Y`S
[36:1] Ya.`Seen.
[36:2] And the Quran, the wise.
Note: This set of initials confirms that the Quran is full of wisdom and we must study and understand it to have the knowledge to do the righteous deeds.

S
[38:1] Saad and the Quran having the warning.
[38:2] Those who have disbelieved are in proudness and defiance.
​Note: This set consisting of a single initial confirms that the Quran is reminder in it, and so whoever disbelieves it, he/she becomes an arrogant and a defiant because of not reflecting to the reminder. It is noted that there is an indication in this sura that we are on this earth because of feud in the High Heaven (38:69)

Note: This Ha.Meem. set occurs in the highest number of suras and the messages that follow this set of initials are a confirmation from God that a clear scripture has come from God, the Almighty, the Wise, the Gracious and the Merciful. Then, we do not have any opportunity to disbelieve it or to follow any other books except this enlightening scripture unless we insist on making us losers.

HM/`A`SQ
[42:1] Ha.Meem.
[42:2] `Ayn.`Seen.Qaf.
[42:3] Thus, Who reveals to you (Muhammad) and to those before yourself is God, the Almighty, the Wise.
[42:4] To Him belongs whatever in the heavens and whatever in the earth, and He is the Most High, the Great.
[42:5] The heavens from above them almost shatter, and the angels glorify with praise of their Lord, and ask forgiveness for those in the earth. Unquestionably, indeed, God is the Forgiving, the Merciful.
Note: By taking oath referring to 2 sets of Quranic initials God has confirmed His own work and identity stating that He has revealed the Quran and what was before it to guide and help humanity being Sovereign over all things while the angels who are consistently glorifying with praise of their Lord ask forgiveness for those who are in the earth while God is forgiving and merciful.

Q
[50:1] Qaf and the the Quran, the glorious.
[50:2] Nay, they have wondered that a warner from among them has come to them! The disbelievers said, “This is an amazing thing.
Note: This set, Q confirms the Quran to be glorious informing the people that it has been revealed to someone who came from among them as a warner, and it will not be easy for the disbelievers to accept it.

NuN
[68:1] NuN, the pen, and what they (the people) write.
[68:2] You are not by your Lord’s grace of a madman
Note: This set confirms that the prophet not only memorized the Quran but also wrote it as God wills for perfect preservation of the revealed Quran. This set represents 2 Ns, which may refer to 2 important characters of the prophet to be a blessed person but not crazy, and this assurance was required for the contemporary as well as the subsequent generations of the people to believe in him to accept the message sent down to him from God.

The above review indicates that the Quranic initials play significant role in the literary Quran. But we could not realize any significance of these letters except considering them to be mysterious letters or the meaning is only known to God or their meaning were secret being only known between God and the prophet. If we were sincere or are not driven by Satan, we would not overlook their significant role to understand the real meaning of these letters. If we could be able to apply our logic, we would not assign such meanings to these letters. If these letters did not have any meaning or significance to us, God would not include them in His final guidance wherein there is no error (2:2, 32:2), ambiguity (39:28) and falsehood (10:32). We have learned from the detailed study of the Quran that God has referred to many of His creations such as the star, sun, and moon as well as dawn and night before mentioning many crucial commands to convince us that these commands need our special attention to understand and follow. It is true that the numeric meaning of these initials was hidden from us for 14 centuries but the literary significance of these initials was not hidden from the true believers of God and the Quran. So the Quran has always been and would be fully detailed, complete and perfect to serve as the guidance from the time of its revelation to the end of the world irrespective of time of eras and generations of people.
Peaceful Friday, salaam and God bless.
Tafazzal (6/5/2015)