There are 40 instances of aslaha including its derived forms, and in the verb (28), verbal noun (7) and active participle (5) forms as shown in the table below: These instances are being reviewed to have clear understanding from the Quran in different contexts that if we repent and reform even when we have made mistakes and have committed sins, God is Forgiving and Merciful upon us and we can deserve reward with Him through perfecting our belief and practices according to Quran to achieve this goal. 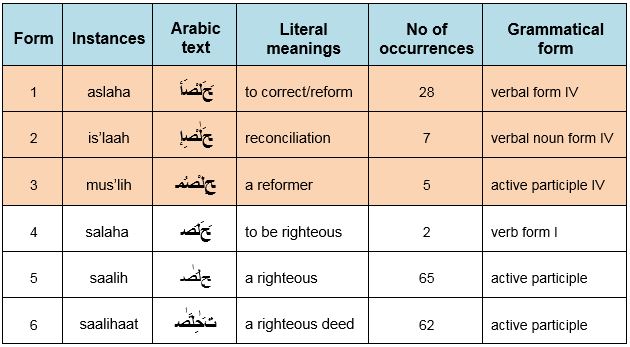 Note: The above table is populated with data obtained from the corpus.quran.com.

There are 28 instances of aslaha in the verb form meaning “to correct/reform” in 27 verses across 18 suras are described below:

[2:160] Except those who have repented, and have reformed, and have proclaimed (illaa alladheena taabuu wa-aslahuu wa-bayyanuu), are those I accept repentance from them, I am the Acceptor of repentance, the Merciful.

[2:182] But whoever has feared from a testator any error or sin, then he makes a corrective measure between them, then there is no sin on him (fa-aslaha baynahum fa-laa ith’ma `alayhi). Indeed, God is Forgiving, Merciful.

[2:224] And you are not to make God a subject for your oaths that you do good and be righteous and make peace between the people (an tabarruu wa-tattaquu wa-tus’lihuu bayna al-naasi). And God is Hearer, Knower.

[4:128] And if a woman has feared oppression or desertion from her husband, then there is no sin for both of them that they reconcile a reconciliation between themselves (an yus’lihaa baynahumaa sul’han), and the reconciliation is better, and has been swayed the souls of the greed. And if you do good and fear, then  God has been Cognizant of what you do.

[4:129] And you will never be that you can deal between the women justly, even if you have intended that you do not incline the inclination to one, then you leave her (the other) like the suspended one. And if you reform and fear (wa-in tus’lihuu wa-tattaquu), then indeed, God has been Forgiving, Merciful.

[4:146] Except those who have repented, and have reformed, and have held fast to God, and have been sincere in their religion for God (illaa alladheena taabuu wa-aslahuu wa-i`tasamuu billahi wa-akhlasuu deenahum lillahi), then those are with the believers, and soon God will give the believers a great reward.

[5:39] Then whoever has repented after this wrongdoing, and has reformed (fa-man taaba min ba’di zul’mihi wa-aslaha), then indeed, God turns to him. Indeed, God is Forgiving, Merciful.

[6:48] And we do not send those who have been sent except bearers of good news and warners. So whoever has believed and has reformed, then there is no fear for them, nor will they grieve (fa-man aamana wa-aslaha fa-laa-khawfun `alayhim wa-laa hum yahzanuuna).

[6:54] And when has come to you those who believe in our revelations, then say, “Peace be upon you”. Has prescribed Your Lord upon Himself the mercy that he whoever among you has done evil in ignorance, then he has repented after it and has reformed (annahu man `amila minkum suuan bi-jahaalatin thumma taaba min ba`dihi wa-aslaha), then indeed, He is Forgiving, Merciful.

[7:35] O children of Adam, if has come to you messengers from among you, they narrate My revelations to you, then whoever has feared and has reformed (yaqussuuna `alaykum aayaatee fa-mani ittaqaa wa-aslaha), then there is no fear for them, nor will they grieve.

[7:142] And we have appointed Moses for thirty-night and have completed them with ten (more). Thus, has completed forty-night, a set term of his Lord. And has said Moses to his brother Aaron, “Succeed me in my people, and you shall reform and are not to follow the way of the corruptors (wa-aslih wa-laa-ittabi` sabeela al-muf’sideena).”

[8:1] They ask you about the spoils of war, say: “The spoils of war belong to God and the messenger.” So, you shall fear God and shall reform that between yourselves (fa-ittaquu allaha wa-aslihuu dhaata baynikum), and shall obey God and His messenger if you have been believers.

[10:81] When they had thrown, Moses said, “What you have brought with it is the magic; indeed, God will nullify it. Indeed, God does not credit a work of the corrupters (inna allaha laa-yus’lihu `amala al-muf’sideena).”

[21:90] So we responded to him and granted him John; we corrected his wife for him (fa-is’tajabnaa lahu wa-wahabnaa lahu yahyaa wa-aslahnaa lahu zawjahu). Indeed, they have been to hasten in the good deeds, and implore us with hope and fear, while they have been the humbles to us.

[26:152] Those who spread corruption in the earth while they do not reform (alladheena yuf’siduuna fee ardi wa-laa-yus’lihuuna).

[27:48] There has been nine gangsters in the city, they spread corruption in the earth while they do not reform (yuf’siduuna fee ardi wa-laa-yus’lihuuna).

[33:71] He will correct your works for you, and will forgive your sins for you (yus’lih lakum a`maalakum wa-yaghfir lakum dhunuubakum). And whoever obeys God and His messenger; then certainly, he has achieved a great achievement.

[42:40] And an evil’s recompense is evil like it. So whoever has pardoned and has reformed, then his recompense is on God (fa-man afaa wa-aslaha fa-arjuhu `alaa allahi). Indeed, He does not love the wrongdoers.

[46:15] And we have enjoined the human being kindness with his parents. His mother has carried him in hardship, and has given birth to him in hardship, and his bearing and his weaning is until thirty months. When he has reached his maturity and has reached forty years, he said: “My Lord, grant me that I can appreciate Your favor which You have bestowed upon me and upon my parents, and that I can do as righteous You like him, and help me to reform in my offspring (wa-an a`mala saalihan tardaahu wa-aslih lee fee dhurriyaati). Indeed, I have turned to You, and indeed, I am with the submitters.”

[47:2] And those who have believed and have done the righteous deeds, and have believed in what has been revealed through Muhammad and it is the truth from their Lord – He has removed their evil deeds from them and has improved their condition (kaffara `anhum sayyiaatihim wa-aslaha baalahum).

[49:10] Only brothers are the believers; so you shall help between your brothers reform (fa-aslihuu bayna akhawaykum) and shall fear God that you may be bestowed mercy.

There are 7 instances of is’laah in the verbal noun form meaning “correction, reformation or reconciliation” in 7 verses across 4 suras are described below:

[2:220] In the Here and the Hereafter. And they ask you about the orphans. Say, “Improving situation for them is better (is’laahun lahum khayrun). And if you associate with them, then they are your brothers.” And God recognizes the corrupter from the reformer. And if God had willed, surely, He could have put you in difficulty. Indeed, God is Almighty, Wise.

[2:228] And the divorced women shall wait of themselves for three monthly cycles. And it does not make lawful for them that they conceal what God has created in their wombs, if they believe in God and the Last Day. It is their husbands’ privilege of their back during that if they wish for reconciliation (fee dhaalika in araaduu is’laahan). And for them it is like that which is on them in the right manner, and for the men on them (ex-wives) is a degree. And God is Almighty, Wise.

[4:114] There is no good in much of their private talk, except whoever has advocated with charity, or kindness, or conciliation between the people (aw is’laahin bayna al-naasi). And whoever who does that seeking God’s pleasure, then soon we will give him a great reward.

[7:56] And you are not to spread corruption in the earth after its reformation (wa-laa-tuf’siduu fee al-ardi ba’da is’laahihaa), and you shall call Him in fear and hope. Indeed, God’s mercy is near for the good-doers.

[7:85] And to Madyan, their brother Shu`aib. He said, “O my people, you shall worship God; there is no any other god for you other than Him. Certainly, has come to you a clear proof from your Lord, so you shall give full of the  measure and the weight, and you are not to deprive the people of their things, nor are you to spread corruption in the earth after its reformation (wa-laa-tuf’siduu fee al-ardi ba’da is’laahihaa). That is better for you, if you have been believers.

[11:88] He (Shuaib) said, “O my people, have you seen if I have been with a clear proof from my Lord, and He has provided me from Him a good provision? And I do not intend that I differ from you to what I forbid you from it. I do not intend except the reformation what I have been able, nor my success except with God (in ureedu illaa is’laahan is’tata`tu wa-laa-tawfeeqee illaa billahi). Upon Him I have put trust and to Him I turn.

There are 5 instances of mus’lih in the verb form meaning “reformer” in 5 verses across 4 suras are described below:

[2:11] When it is said to them, “You are not to spread corruption in the earth,” they said, “We are only reformers (innamaa nahnu mus’lihuuna).”

[2:220] In the Here and the Hereafter. And they ask you about the orphans. Say, “Improving situation for them is better (is’laahun lahum khayrun). And if you associate with them, then they are your brothers.” And God knows the corrupter from the reformer (wal-lahu ya`lamu al-muf’sida mina al-mus’lihi). And if God had willed, surely, He could have put you in difficulty. Indeed, God is Almighty, Wise.

[7:170] And those who hold fast to the scripture, and have observed the Contact Prayer (al-salata), indeed, we do not let go waste a reward of the reformers (inna laa-nudee`u ajra al-mus’liheena).

[11:117] Your Lord has not destroyed the cities unjustly, while their people are reformers (wa-ahluhaa mus’lihuuna).

[28:19] Then when he had intended that he will strike with the one who was an enemy to both of them, he said, “O Moses, do you intend that you will kill me, as you have killed another person yesterday? Neither you want except that you be a tyrant in the earth, nor you want that you be of the reformers (in tureedu illaa an takuuna jabbaaran fee al-ardi wa-maa tureedu an takuuna mina al-mus’liheena).”


In conclusion, God has given us a great tool in the Quran that He is Forgiving and Merciful to those who acknowledged their wrongdoings and sins, and repented and reformed to adjust when we are in any situation. We are now in the worst situation being Islam under piles of corruptions and innovations because of the slogan of ‘the Quran and Hadith’ while we had a hope to reform with the slogan of ‘the Quran and its mathematical system’ but diminishes it for a translated version of Quran having many mistakes, misinterpretation and inconsistencies being a source of God’s commands and laws. God’s blessings and mercies always been around us that we may explore to expose the truth what has been buried under the falsehood or has been mixed with the falsehood. If we make initiatives, God helps us as He is a teacher of Quran to save us and our families while He has made the Quran easy for us being the warning, even practicing social distancing, a lesson learned from the world-wide pandemic.
Peaceful Friday, salaam and God bless.
Tafazzal (6/12/2020).