The status of Muhammad considering him the final prophet is very high among the traditional Muslim circle in comparison to other messengers and prophets of God just like Jesus among the Christian circle, even though He has repeatedly warned us in the Quran not to make any distinction between any of His messengers and prophets (2:136 & 285, 3:84 and 4:152). As a result, the volumes and volumes of hadith books are written some 200 years after his death in one side while on the other side he is consistently being elevated and focused in their praise and prayers that nullify their all works due to idol worshiping as idol worshipping contributes nothing to their souls. Since God is aware of all our situations (10:61), He has let us know that Muhammad is a messenger like Musa that can be confirmed from the Quran to stay in the straight path and to remember Him in a right way.

There are many verses in the Quran that has addressed the matter but here are a few to cite as examples that may help us to make it clear in our hearts.

a. Pertinent verses in the Quran.

Let us review the following verses of the Quran carefully to understand the reflection of Muhammad being a messenger of God like Musa:

[46:12] And before this, the scripture of Moses was a guidance and mercy. This is a confirming scripture in Arabic tongue, to warn those who transgressed, and to give good news to the righteous.
[46:29] And when we directed to you (Muhammad) a number of the Jinn, to listen to the Quran, then they attended it; they said: “Listen quietly.” Then, when it was done, they returned to their people as warners.
Note: A group of the Jinn listened to the Quran and then they went back to their people and warned them with it. God has set an example here for all of us to share the truth with others when we come across any.

b. Both Muhammad and Musa were chosen to be a messenger prophet.

God has chosen both Muhammad and Musa as a messenger prophet that has reflected in the following verses of the Quran:

[7:157] Those who follow the gentile messenger prophet (al-rasuula al-nabiya al-ummiya) whom they find written for them in the Torah and the Injeel; he enjoins them to the good and forbids them from the evil, and he makes lawful for them the good things and makes unlwaful for them the bad things, and he relieves their burden and the shackles which have upon them. So, those who have believed with him, and have honored him, and have supported him, and have followed the light which has been sent down with him; those are they who are the successful ones.”
[19:51] And mention in the scripture, Moses. Indeed, he has been chosen and has been a messenger prophet ( wa-kaana rasuulan nabiyyan –nabiyyan being indefinite noun).
Note: The above Arabic expressions indicate that both of them have been a messenger prophet except the difference that Muhammad has been a gentile messenger prophet.

c. God Himself taught Muhammad while He spoke to Musa.

God taught Muhammad the entire Quran at the highest horizon (another descent) while He spoke to Musa directly at the right side of Mount Sinai and gave him tablets of ten commandments, and both of them have immense blessings from Him:

[53:5] The Most Powerful taught him (Muhammad).
[4:113] If it were not God’s grace upon you (Muhammad) and His mercy, some of them would have misled you. But they mislead except themselves and they cannot harm you in anyway. And God has sent down to you the scripture and the wisdom, and He has taught you what you did not know. Indeed, God’s grace upon you has been great.
[7:144] He said, “O Moses, I have chosen you for the people with My messages and My words. Therefore, you shall take which I have given you and shall be with the grateful ones.”
Note: Here is another proof for focusing on the message given to the messengers instead of the human messengers.

d. Muhammad and Musa were given the statute book.

[25:1] Blessed is the One who has sent down the statute book through His servant (Muhammad) that it can serve as a warner for the worlds.
[36:11] You (Muhammad) can ONLY (innamaa) warn whoever has followed the reminder (Quran) and has feared the Most Gracious in the unseen. So, you shall give him good news of forgiveness and an honorable reward.
[21:48] And we gave Moses and Aaron the statute book, a light, and a reminder for the righteous.

e. Ten commandments were given to Musa during his appointment at Mount Sinai.

Moses was given ten commandments through tablets (7:145) which are not any more than the same message given to other messengers down the generations including prophet Muhammad that we can be sure from the following table:

Note: However, the Sabbath was relinquished with the revelation of the Quran while God has ordered us to make every effort and drop all businesses to attend the Friday congregational prayer. We should force ourselves to observe the commandments, even if it means giving up on trade. We may tend to our business during the rest of the day but with continuous appreciation of God (62:10).

We are blessed with the knowledge to mathematically confirm many of our given rites as well as the crucial events and commandments to remove any traces of doubt from our hearts. God willing, we have the opportunity to apply that tool to confirm our concern that Muhammad is a messenger like Musa to eliminate any traces of confusion from our hearts.

1. Confirmation from mentioning of Muhammad and Musa by name in the Quran

There are many references of Muhammad and Musa in the Quran. But Muhammad has been mentioned 4 times by name while Musa has been mentioned 129 times by name in the Quran. If we add the number of times they have been mentioned by name in the Quran, the total is a multiple of 19 => 4 + 129 = 133 (19x7), which establishes such relationship between them to make it simple and clear for our understanding. It is mention-worthy that both Adam and Jesus are mentioned 25 times each by name in the Quran, which is a direct reflection of mathematical coding of the Quran and a physical proof for all of us to understand the equality in the creation of Adam and Jesus as per God is concerned (3:59). This provides us a clear evidence to eliminate any confusion and controversy around the birth and death of Jesus as well as his return, and is an opportunity for millions of Christians to get out of the trinity, which is a false doctrine.

2. The event of Mount Sinai

God spoke to Musa directly at the Mount Sinai and the details of the event are mentioned in the Quran. This remarkable event in the human history is detailed out in 98 verses of the Quran across 6 initialed suras. If the relevant sura and verse numbers of all these references are added, the sum is a multiple of 19 => 5814 = 19 x 306 (See Table below for details). 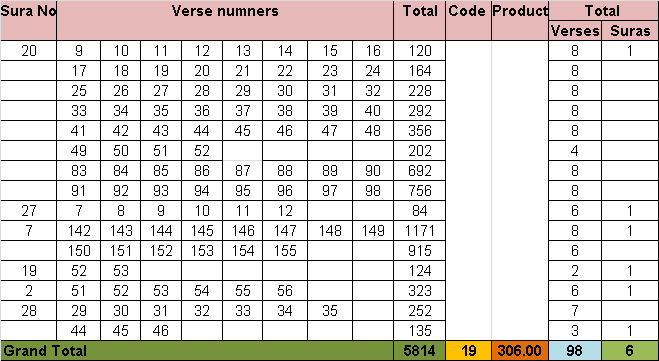 3. The event of revealing the whole Quran

It is well known to the Muslim world that the entire Quran was placed into prophet Muhammad’s soul in a special night known as the Night of Power in 13 B.H (609 A.D.) when he, the soul not the body was taken to the highest Heaven. Subsequently, the angel Gabriel helped the prophet release a few verses of the Quran at a time, from his soul to his memory over the time period of 23 years to place the whole Quran into his memory. This breakthrough event of revealing the whole Quran in one night is mentioned in a number of suras covering its different aspects. There is a short sura which has addressed the details of the process including its significance and completion while a part of some suras covers other important aspects of the event. There are 26 verses across 5 suras in the Quran that cover this awesome event. The total of the relevant sura and verse numbers associated with the event is a multiple of 19 = 589 = 19x31 (See Table below for details).

Both Muhammad and Musa were given the statute book and the reminder to guide the respective generation of people. Like the Quran, the scripture of Moses was a guidance and mercy for the people he has been chosen for. While there is specific mention of the scripture of Musa with regard to the event of listening of the Quran by a group of jinns. They are both messenger prophets but their guidance period is different, and the scripture given to Muhammad is the last scripture. If we can understand guidance period and make focus on the guidance (message) given to them, it would be more clear to us and there should not have any confusion to draw this conclusion.

God talked to Musa at the Mount Sinai but behind the barrier and gave ten tablets containing 10 commandments while He taught Muhammad placing the entire Quran in his soul in the highest horizon and he saw him in another descent. Moses was given ten commandments through tablets which are not any more than the same message given to other messengers down the generations including prophet Muhammad. Musa faced the greatest tyrant on earth to free the people of Israel from the oppression of Pharaoh while Muhammad fought many battles against the idol worshippers, and the final victory came through entering Ka’ba for performing Hajj safely by defeating them.

There are both literary and mathematical proofs and symmetries from the Quran, even from the historical perspective to believe that Muhammad is a messenger like Musa. Some of us may be aware that both Muhammad and Musa are messenger prophets while many Muslims believe that Muhammad is the latest and the greatest prophet disregarding the commandment given in the Quran ‘not to make any distinction between any of His messengers.’ They also believe that he will intercede for them on the Day of Judgment to help them enter Paradise. Thus, their excessive focus on Muhammad as a person involves them to idolize him in their praise and prayers instead of dedicating their praise and prayers to God alone. However, the concept of intercession predominantly exists among the Christian and the Muslim communities. The Christians believe that Jesus being Messiah will save all of them while Muhammad will intercede for the Muslims, even though intercession is a myth according to Quran, even from a common sense. However, it may be difficult for the majority Muslims to accept the fact that Muhammad is a messenger like Musa because of centuries-long ignorance, even it is from the Quran supported by both literary and mathematical proofs. On the other hand, a few of us may be surprised by knowing and reflecting on God’s unexceptional teaching in the Quran, while many of us who are away from the straight path because of preset programming in their minds, may get out of the idol worshiping.

There are clear proofs and unexceptional events associated with them to confirm that Muhammad is a messenger like Musa. This fact might be an opportunity for millions of Muslims to help them to get out of their excessive focus on Muhammad and of idolizing him in their praise and prayers. Thus, they can avoid preset programming in their minds about Muhammad and can establish the worship of God alone in their hearts and dedicate their praise and prayer to Him alone to be responded by Him to grow their souls. Those who truly believe in God and are certain about the Hereafter and uphold the Quran as a valid source of all religious laws and teachings may accept the truth and re-educate themselves based on this parallelity to perfect their beliefs and practices to save their souls.
Peaceful Friday, salaam and God bless.
Tafazzal (3/3/2017).