Note: Noon prefixed to surah Al-Qalam is spelled out to represent two Noons 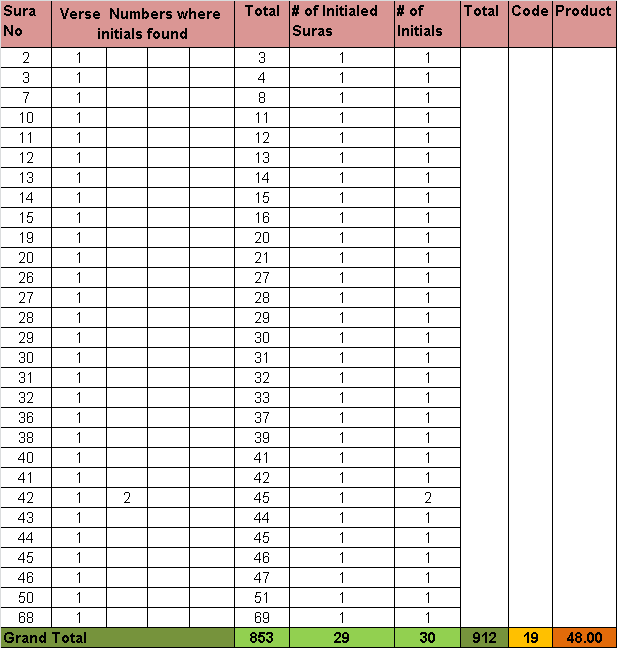 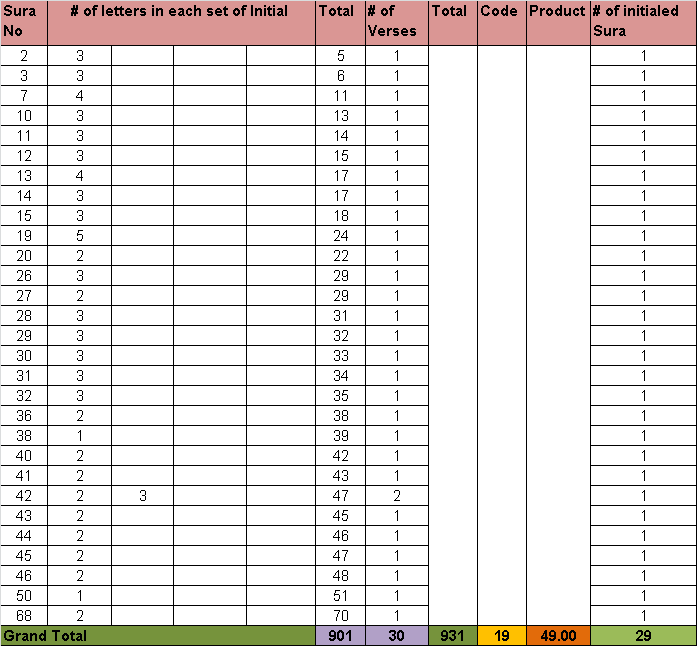 Note: The parameters, letter # in the initial and # of verses of initials are confirmed. Verse numbers are replaced with letter numbers in the initials in the confirmation (b) while both verse and initial # are same, which is 30.

The above two pieces of mathematical confirmation about Quranic initials authenticate the following:

God has designed His last scripture which we may also call it the last version of His scripture and has assigned numerous attributes to it to serve as a guidance for all the people of the world from the time of prophet Muhammad until the end of the world. The Quran is efficiently designed and it has all to serve as the last scripture. The initials as the physical proofs of Quran hidden from us 1400 years, which has been unveiled in 1974 by God’s leave serve as incontrovertible proofs that the Quran is God’s message to the world and as a letter level guard to continue to have a pure Arabic Quran until the end of the world in the event of any human errors, variations or distortions with possibility of a single version of the Quran for all.

The Quran has divinely been divided into suras and verses, composition and revelation, numbered and unnumbered verses, and presence and absence of opening verse known as Basmala, and all of these divisions subject to extract appropriate message from it in particular context. God has also assigned numerous attributes to it for us to apply the principle of ‘divide and conquer’ for our best use of it such as initialed and un-initialed surahs, God’s words for our prayer and God’s words as our guidance, Meccan and Medinan surahs which is because of immigration of prophet from Mecca to Medina, and early and later revelations, isolation and association of certain sets of verses with certain events, processes and practices to better understand to avoid any misconceptions or to remove any distortions and innovations while the division of the whole Quran into 30 ‘paras’ facilitates memorization of the Quran for many but of course, not to read the whole Quran in the Tarawih prayer during the month of Ramadan as this practice is not a commandment from God.

The true believers trust in God, and depend on His words to understand what to do and how to do being reverent to Him as it has details for everything while some instructions are direct, some are indirect and some are to be derived from it. The Quranic initials being attributes of Quran play a significant role to help us to have clear understanding in practicing certain things in a right way and their two-fold mathematical proof provides us certainty to accept them. It is true that 14 sets consisting of 14 Arabic letters in 30 Quranic initials to be the physical proofs of the Quran from God and their total gematrical value, 1709 to pinpoint the survival and end of the world in the year 1710 A.H were hidden from us for 14 centuries being prophetic sign but the significance other than that was not hidden from the true believers of God and Quran. So the Quran has always been and would be fully detailed, complete and perfect being the guidance from the time of its revelation to the end of the world same as the Quran would continue to be a pure Quran for all the people of the world.
Peaceful Friday, salaam and God bless.
Tafazzal (12/30/2016).