There are 29 surahs in the Quran prefixed with 14 different sets of “Quranic Initials” consisting of one to five letters per set. Fourteen letters, half the Arabic alphabet, participate in these initials. The table below is the list of Quranic initials prefixed to the surahs with their names according to arrangement in composition of the Quran. 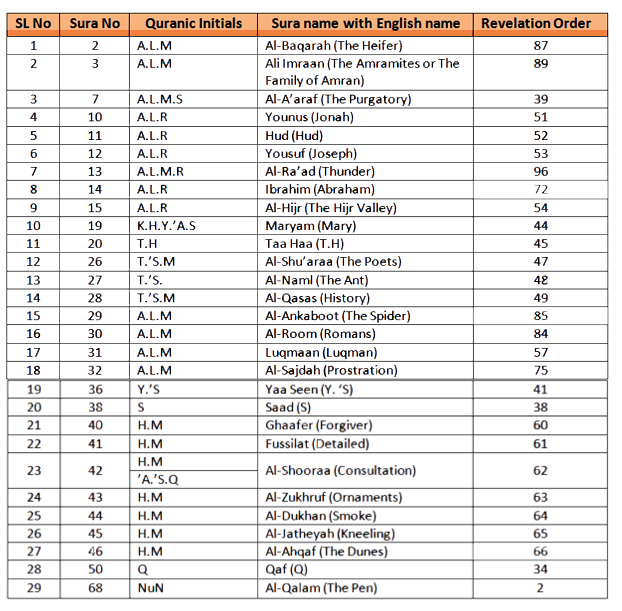 Note: The ALM initialed Surahs, 2, 3, 29, 30, 31 and 32 are recounted first and the major difficulty as encountered was the easy missing of Alifs and the Hamzas written on an extension (madda). The orthographic difference among the recent editions of the Quran has also been seen in verse 3:136. In verse 3:136, the word “Jaza’uhum” is written without an Alif in the Egyptian and Syrian editions but with an Alif in the King Fahd edition. The orthography of 3:136 as written in the Egyptian and Syrian edition maintains the mathematical structure in the ALM Suras. Upon proper counting the missing Alifs and free standing Hamzas replacing madda Hamzas reflecting on the orthographic difference, the updated ALM total is obtained in the ALM initialed suras is also a multiple of 19. The occurrence of Laam is corrected in Sura 30.

Note: During recounting of ALR initial, a human (scribe) error is found in the orthography of two words of the same root in Sura 10 in the Egyptian edition and King Fahd edition of the Arabic Quran. After correcting by removing extra Alif from the word “Aayatuna” in (10:15) and the word “Aayatina” in (10:21) based on the old Quran (Gold Quran), the updated ALR total is found to be a multiple of 19. The occurrence of Laam is also corrected in Surah 11.

Note: The updated count of ALMS is obtained upon correcting the human (scribe) error in the orthography of the identified 7 words in Sura 7 in the Egyptian edition and King Fahd edition of the Arabic Quran. The study of the new and old Quran confirmed the presence of human errors in the writing of seven words in Surah 7.

Note: The raw count of the Alifs in the new editions of the Qurans before any correction, was found to be 609, of these there were 50 Hamzas and 559 Alifs. The study of the new and old Quran confirmed the presence of human errors in the writing of three words in Sura 13.

Note: Naturally, the alteration of a single letter “H” or “M” in any of the seven H.M.-initialed suras would have destroyed this intricate phenomenon.

Note: The letter “Yaa” is written in the Quran in two forms; one is obvious and the other is subtle. The subtle form of the letter may be confusing to those who are not thoroughly familiar with the Arabic language. A good example is the word “Araany” which is mentioned twice in 12:36. The letter “Y” is used twice in this word, the first “Y” is subtle and the second is obvious. Surah 36 does not contain a single “Yaa” of the subtle type. This is a remarkable phenomenon, and one that does not normally occur in a long surah like Sura 36.

Note: ​This is the longest set of initials, consisting of five letters, and it occurs in one surah, Surah 19 wherein the virgin birth of Jesus is mentioned.

Note: The word “Bastatan” in 7:69 is written in some printings with a “Saad,” instead of “Seen.” This is an erroneous distortion that violates the Quran’s code. By looking at the oldest available copy of the Quran, the Tashkent Copy, it is found that the word “Bastatan” is correctly written with a “Seen”. Upon correction, the total count of Saad is a multiple of 19.

Note: There are proofs that the initial “NuN” must be spelled out to show two N’s. This N-initialed sura is the first revelation according to Order of Revelation but is the last in the physical arrangement of the Quran among all the initialed suras.

There are three significant rules applied to the counted initials when there is a disagreement among the different editions of the Mus-haf. For a word to be considered a human error in any of the new editions and then corrected, it has to pass these three strict criteria, all of them and in this order:

The Quranic initials occur at certain frequency in the relevant Surahs which prevent the text of the Quran from letter level distortions. Moreover, these physical proofs of the Quran from God also emerge the following other miracles:

The study on counting of Quranic initials was not a straight forward process but every attempt has been made to get an appropriate occurrence of each initial in the relevant suras. Both new and old Quran are studied to correct any human error during counting of initials followed by a defined acceptable process. When any word in new editions is considered to be human error, it has to pass this process. The old Quran (Tashkent copy and Gold Quran) confirms the presence of human errors in the new Quran (Egyptian, King Fahd, Syrian editions) and the edition in new Quran also helps to find the human error as well. The study supports the understanding that the Hafs writing of the Quran is the best representation of the original Mus-haf as it represents the intact mathematical miracle of the Quran. It is also found that this mathematical miracle of the Quran is not only useful to prove the frequency of occurrences of the initials in the relevant suras but can also be used as an excellent tool to verify human errors in future or past writing of the Mus-haf. Thus, the Quranic initials serve as incontrovertible proofs that the Quran is God’s message to the world.
Peaceful Friday, salaam and God bless.
Tafazzal (11/14/2014)

How Arabic Alphabets look in different locations in a word. 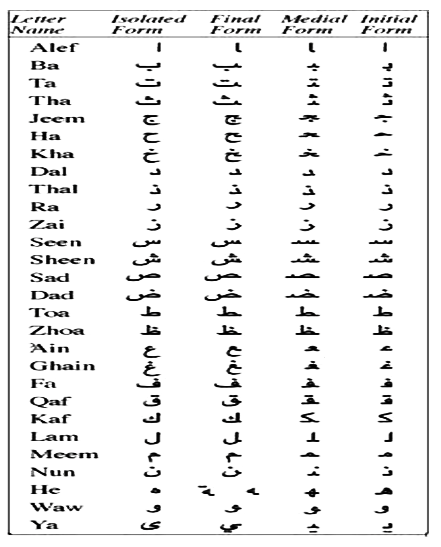