​​Submitters (Muslimeen in Arabic) all over the world fast during the month of Ramadan from the beginning of dawn to sunset as decreed for the people by God, is obligatory fasting. In addition, they may also fast in the event of violating any God’s laws to expiate themselves, is optional fasting. Fasting is a strict form of religious rites. During fasting, Submitters abstain from eating, drinking and sexual activity during the day time as commanded by God in the Quran. The word “Ramadan” is derived from the word “Ramz” which means “to burn or to scorch” and here it may apply to “the burning of our selfish desires.”

At the outset, for somebody who does not have experience with fasting, it seems to be hardship on the people. It is very common for Muslims (Submitters) to have a colleague or a friend who may exclaim, “You mean you cannot even drink water till sunset, not even a sip!” Submitters know that God did not reveal His laws if it were a hardship for us (3:108). In fact, obeying and following God’s commandment of fasting during the month of Ramadan or in any other times, is for our benefit both spiritually and physically.

The Arabic counterpart of fasting is “siyaam” or “sawm”, which literally means ‘to be at rest’. Many medical professionals recognize that fasting is beneficial to our health. It provides a break in the cycle of rigid habits and gives some of our internal organs much-needed rest. However, in our emphasis on refraining from food, drink, and marital relations during the daylight hours, we should not forget many other important aspects of this sacred time. Perhaps, it would help us to remember not only the physical act of fasting, but also its underlying purpose.

Like all other practices in Submission, the practice of fasting has been in existence since the time of Abraham. Here are details of fasting from the Quran along with its mathematical confirmation:

[2:183] O you who have believed, fasting has been decreed for you, as it had been decreed for those of your before, so that you may become righteous.
[2:184] Specified days. So whoever has been ill among you or on a journey, then the prescribed number of other days. And for those who can afford it, a ransom of feeding a poor. While whoever has volunteered good, then it is better for him. And that you can fast, is better for you, if you have been knowing.
[2:185] Ramadan which is a month, has been revealed in it the Quran as a guidance for the people, clear proofs of the guidance and the statute book. So whoever among you has witnessed the month, then he should fast in it, and whoever has been ill or on a journey then the prescribed number from other days. God wishes ease for you and He does not wish hardship for you, and that you may complete the prescribed number, and that you may glorify God through which He has guided you and that you may appreciate.
[2:187] It has been made lawful for you the approach to your women in night of the fasting. They are garments for you and you are garments for them. God knows that you have committed to deceive yourselves, so He has turned to you and has had mercy on you. So now you should approach them and shall seek what God has prescribed for you. And you shall eat and drink until the white thread becomes distinct from the black thread of the dawn; then you shall complete the fast until the night. And you should not approach them while you are secluded in the masjids. This is of God’s limits, so you should not approach it. Thus that God makes clear His revelations for the people that they may become righteous.
[33:35] The submitting men, the submitting women, the believing men, the believing women, the obedient men, the obedient women, the truthful men, the truthful women, the steadfast men, the steadfast women, the reverent men, the reverent women, the charitable men, the charitable women, the fasting men, the fasting women, the chaste men, the chaste women, and the men who commemorate God frequently, and the commemorating women; God has prepared for them forgiveness and a great recompense.

If a pilgrim does not have an animal to sacrifice

[2:196] And you shall complete the Hajj and the Umrah for God. But if you have been prevented, then whatever has obtained with ease of the animal to sacrifice, and you do not shave your heads until the animal to sacrifice reaches its destination. But whoever has been ill among you or with him there is an ailment of his head, then ransom by fasting or charity or practice. Then when you have been secure, then whoever has taken of the Umrah to the Hajj, then whatever has obtained with ease of the animal to sacrifice. But whoever cannot find, then fasting for three days during the Hajj and seven when you have returned. That is ten in all; that is for him whoever of his family does not be nearby the Sacred Masjid. And you shall fear God, and shall know that God is severe in the retribution.

When someone kills someone by accident

When an oath is violated

[5:89] GOD does not hold you responsible for the mere utterance of oaths; He holds you responsible for your actual intentions. If you violate an oath, you shall atone by feeding ten poor people from the same food you offer to your own family, or clothing them, or by freeing a slave. If you cannot afford this, then you shall fast three days. This is the atonement for violating the oaths that you swore to keep. You shall fulfill your oaths. GOD thus explains His revelations to you, that you may be appreciative.

If someone estranges his wife as his mother

[58:2] Those among you who estrange their wives (by declaring them as forbidden in sex) as their mothers know full well that they are not their mothers. Their mothers are the women who gave birth to them. Indeed, they are committing a blasphemy and a falsehood. GOD is Pardoner, Forgiver.
[58:3] Those who estrange their wives in this manner, then reconcile thereafter, shall atone by freeing a slave before resuming their sexual relations. This is to enlighten you. GOD is Cognizant of everything you do.
[58:4] If you cannot find a slave to free, you shall fast two consecutive months before resuming sexual relations. If you cannot fast, then you shall feed sixty poor people. You shall believe in GOD and His messenger. These are GOD’s laws. The disbelievers have incurred a painful retribution.

Like Shahaadah, Salat and Zakat the commandment of fasting has also been mathematically confirmed. There are 11 occurrences of the word, “Siyam” or “Saum” in 10 verses of 5 suras in the Quran. If we add the numbers of suras and verses of these occurrences, the total is 1387, which is divisible by the code 19 of the Quran (19×73). However, the mathematical confirmation of the precise commandment from God for both obligatory and optional fasting along with brief comments is given below: 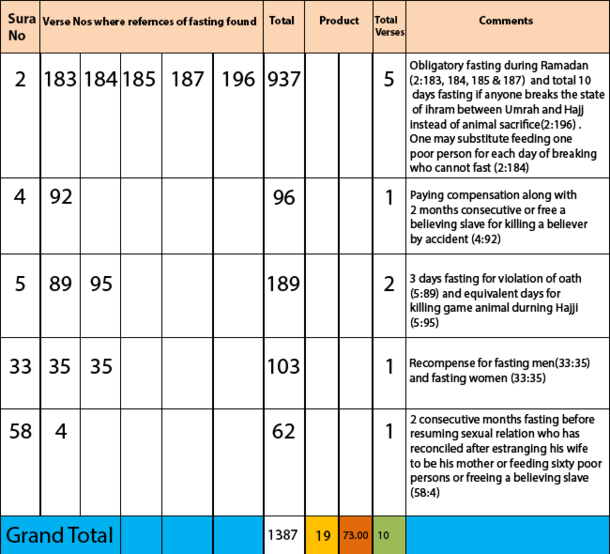 ​Ramadan is a very significant month wherein fasting is decreed for us as the Quran, a guidance for mankind and the statute book was revealed on the night of 27th Ramadan known as ‘Night of the Power’ or laylati al-qadr which is better than a thousand-month for giving guidance and the statute book. Thus, we are given the opportunity to gain the real benefit of enhanced remembrance of God throughout the month. The additional time spent before dawn preparing for the fast, the breaking of the fast, and the supplications to God for His support in making the fast easy and the increased gathering to commemorate God, all help us remember God so much more. Every moment that we submit to God’s command to refrain from food and drink from dawn to sunset, we are automatically remembering and praising Him consciously and subconsciously. God has not only given us this great blessing, He is also compassionate in accommodating every kind of situation, just so that His servants can submit to His commands and fulfill their obligations. In addition, fasting provides us an opportunity to amend ourselves in the event of violating God’s commands. But there are many corruptions and misconceptions in the practice of fasting that nullify our worship – to consider Ramadan a sacred month, give sadaqatul fitr (a charity made required and given during the month of Ramadan including on the first morning after Ramadan), perform Tarawih and extra salat prayers such as Eid Salat prayer in congregation on the first morning of Shawwal after Ramadan are a few that are very common among us, and as a consequence we are deprived of such benefit.
Peaceful Friday, salaam and God bless.
Tafazzal (6/19/2015)