The people of Moses wanted to see God physically to believe him (2:55) and God had manifested Himself on the Mount Sinai (Horeb) and the Mount collapsed while they could not see Him but were convinced with His presence (7:143) that we know now we are not given vision to see Him in this dimension (6:103). However, in this historical event, Moses was given ten commandments (decalogue meaning ten words) through two tablets (7:145) which are not any more than the same message given to other messengers down the generations including prophet Muhammad that we can be sure from the following table:

The Sabbath was relinquished with the revelation of the Quran while God has ordered us to make every effort and drop all businesses to attend the Friday congregational prayer. We should force ourselves to observe the commandments, even if it means giving up on trade. We may tend to our business during the rest of the day but with continuous appreciation of God (62:10):

[62:10] Then when has been completed the prayer (al-salatu), you shall spread through the land and shall seek God’s bounty, and shall remember God very often that you may succeed.

In fact, the God’s religion has evolved over the period of time according to God’s will to make it befitting to the respective generation of people though the core message always been the same for all generations of people. The God’s religion means the submission to the will of God as given by Him (Quran 3:19), which was formally named during the time of prophet Abraham (Quran 22:78) and the religious rites that we practice today were also given to him that came down to us through the practicing of people generation after generation (Quran 16:123, 4:125). Thus, the religion, submission (Islam in Arabic, which we can call what it means in other languages) given to the human race is the religion of Noah, Abraham, Isaac, Ishmael, Jacob, Joseph, Moses, David, Solomon, Jesus, Muhammad and all the messengers who are mentioned or who are not mentioned in the scripture (Quran 4:164). It is also the religion of Adam and Eve but in a simple form just a few words that were needed to recite for their redemption (Quran 2:37) and the continuation is found in the similar words given in sura 1 (Al-Fatehah – The Key) for our redemption as well.

[5:44] We have sent down the Torah, containing guidance and light. Ruling in accordance with it were the Jewish prophets, as well as the rabbis and the priests, as dictated to them in God’s scripture, and as witnessed by them. Therefore, do not reverence human beings; you shall reverence Me instead. And do not trade away My revelations for a cheap price. Those who do not rule in accordance with God’s revelations are the disbelievers.
[3:48] “He (God) will teach him (Jesus) the scripture, wisdom, the Torah, and the Gospel.”
[3:3] He sent down to you (Muhammad) this scripture (Quran), truthfully, confirming all previous scriptures, and He sent down the Torah and the Gospel.
[5:48] And we have revealed to you the scripture with the truth, confirming (musaddiqan) the scripture what is before it and consolidating (muhayminan) of it. So, you shall judge between them with what God has revealed, and do not follow their wishes as the truth has come to you. For each of you, we have decreed a law and a clear way. Had God willed, He would have made you one community, but He is to test you with what He has given you. So, you shall compete for righteousness. To God you all will return, then He will inform you of what in it you had disputed.
[74:31] And we have not made guardians of the Fire except angels, and we have not made their number except a warning for those who disbelieved, that may ascertain those who have been given the scripture (Jews and Christians) and may increase faith of those who have believed (Muslims), and may not doubt those who have been given the scripture (Jews and Christians) and the believers (Muslims). And that may say those in their hearts there is a disease (hypocrites) and the disbelievers, “What did God mean by this allegory?” Thus, God misguides whomever He wills and He guides whomever He wills. And none knows your Lord’s soldiers except He. And it is not except a reminder for the human race.

[17:110] You shall not utter your Contact Prayers (Salat) too loudly, nor secretly; use a moderate tone.
[5:6] O you who believe, when you observe the Contact Prayers (Salat), you shall: (1) wash your faces and (2)  your arms to the elbows, and (3) wipe your heads and (4) your feet to the ankles……
[2:185] Ramadan which is a month, has been revealed in it the Quran as a guidance for the people, clear proofs of the guidance and the statute book. So whoever among you has witnessed the month, then he should fast in it, and whoever has been ill or on a journey then the prescribed number from other days. God wishes ease for you and He does not wish hardship for you, and that you may complete the prescribed number, and that you may glorify God through which He has guided you and that you may appreciate.
[2:187] It has been made lawful for you the approach to your women in a night of the fasting. They are garments for you and you are garments for them. God knows that you have committed to deceive yourselves, so He has turned to you and has had mercy on you. So now you should approach them and shall seek what God has prescribed for you. And you shall eat and drink until the white thread becomes distinct from the black thread of the dawn; then you shall complete the fast until the night. And you should not approach them while you are secluded in the masjids. This is of God’s limits, so you should not approach it. Thus that God makes clear His revelations for the people that they may become righteous.

On the other hand, there are clear evidences that His religion has been corrupted with man-made innovations such as Talmud, Trinity, and Hadith and Sunnah while some practices are lost. Quran confirms that Salat was lost after some generations for the people of the book (19:59). Losing it involved changing it in every aspect, and the Salat as practiced today by most of the Jews and Christians is different from what was given to their prophets. Very few Jews and Christians have maintained the inherited Salat. In a book entitles “To Pray as a Jew” by Hayim Halevy Donin, it has been found a lengthy explanation of the Prayers as done by the ancient Jews and few of the contemporary Jews. In this book the author put diagrams showing the movement and positions during the prayer. One look at these illustrations is enough for the Muslims to realize the similarity of the prayers of the Jews then and Salat as practiced by the Muslims. 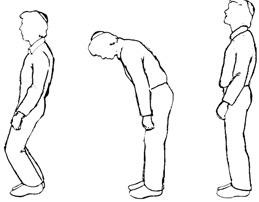 In his comment about these positions the author wrote : “In most contemporary congregations very few people keep to the tradition of falling prostrate. Sometimes it is only the Prayer leader and the rabbi who does so. In more traditional congregations, however, some worshipers, men and women, will join the Prayer Leader and rabbi in the act of prostrating themselves. In Israeli synagogues, the practice is more widespread than in synagogues elsewhere. Since this is a position that we are unaccustomed to, one who has never done this before might very well demur. But once accomplished, the experience provides such a spiritual uplift that one looks forward to repeating it. Those willing to try this ancient ritual form on the rare occasions that call for it might welcome the following diagrams of the correct procedure”

It is also interesting to learn from this book that the prayers of the Jews involve wash before the prayers, (like Wuduu or ablution for Muslims), and the call for Prayers (like the Azan for the Muslims).

Not only a short absence of Moses from his people made them idol worshipers by worshiping calf but most people down the generations make them idol worshipers by excessive focusing on their prophets, messengers and saints even the religious leaders and scholars (9:30-31) instead of focusing on the divine message. The believers of the message fail to realize that prophets and messengers are simple minded people who are chosen with certain message supported by certain prophetic signs to deliver that message to the respective community of the people. They do not have any mission of their own except to deliver the divine message but the followers of the message become blind to their mistakes and weakness considering them heavenly persona. However, their mistakes and weakness are found when they try to do or share something from their own end. Thus, idol worshiping is a human tragedy as the people cannot realize it what they are doing to nullify their all works while God has clearly explained in His final scripture who is worthy of worship to protect us from such horrendous offense (4:48, 4:116):

[30:40] God is the One who created you. He is the One who provides for you. He is the One who puts you to death. He is the One who resurrects you. Can any of your idols do any of these things?
[82:19] The day when no soul can help another soul, and the decision, on that day will belong to God.
[1:2-4] All praise to God, Lord of the worlds. Most Gracious, Most Merciful. Master of the Day of Judgment.
[24:36] In houses that God has allowed to be raised and His name to be remembered therein. Glorify Him therein day and night.
[33:41-42] O you who believed, you shall remember God frequently. You shall glorify Him day and night.
[6:82] Those who believed, and they do not mix their faith with wrong, those, for them is the security, and they are the guided ones.

In conclusion, despite the core message and practice always been the same, God’s religion does evolve over the period of time to make it befitting to the generation of people based on the development of the human civilization on earth according to God’s will. Thus, His religion is progressive that should not be trapped in time and place nor to be connected with any prophets and messengers. However, absolutely, there is no evolution of God, and any such conceptualization or to make it a subject of discussion from any corner is a blasphemy.
Peaceful Friday, salaam and God bless.
Tafazzal (5/20/2016)