[2:199] Then you shall depart from wherever the people depart, and ask forgiveness of God (wa-istaghfiroo allah). God is surely Forgiving, Most Merciful (ghafoorun raheemun).
Note: The pilgrims commemorate God together at Arafaat, then they left for the sacred place (Muzdalifa) to remember God there and depart it on the next morning asking forgiveness of God, and of course, God is Forgiving, Merciful.

[3:135] And those, when they committed evil, or wronged themselves; they remember God then ask forgiveness for their sins (fa-istaghfiroo lijunoobihim), and who can forgive the sins except God? And they do not persist on what they have done while they know.

[3:159] It was a mercy from God that you were nice with them. And if you had been harsh and mean hearted, they would have dispersed from you; so pardon them and ask forgiveness for them (wa-istaghfir lahum), and consult them in the matter; but when you have decided, then put your trust in God. Indeed, God loves those who put their trust.
Note: This statement is in connection with war and war plan. The prophet was commanded to consult with those who participated in the battle with him and to ask forgiveness for them.

[4:64] And we do not send a messenger except to be obeyed by God’s leave. And if they came to you when they had wronged themselves, then asked forgiveness of God (fa-istaghfiroo allah), and the messenger asked forgiveness for them (wa-istaghfara lahum al-rasoolu). Indeed, they would have found God Pardoning, Merciful (tawwaban raheemun).

[4:110] And whoever does evil, or wrongs himself, then ask forgiveness of God (istaghfiri allah); he will find God Forgiving, Merciful (ghafooran raheeman).

[5:74] Then would they not repent to God and ask His forgiveness (wa-yastaghfiroonahu)? And God is Forgiving, Merciful (ghafoorun raheemun).

[8:33] But God is not to punish them while you are with them, and God is not the One who punishes them while they ask forgiveness (wa-hum yastaghfiroona).

[9:113] It is not for the prophet and those who believe that they ask forgiveness (yastaghfiroo) for the idol worshipers, even though they are nearest relatives, after what has come to them to make clear that they are the dwellers of the Hellfire (al-jaheemi).
Note: God does not forgive the disbelievers and the idol worshipers even the righteous ask His forgiveness for them.

[9:114] And asking forgiveness by Abraham (istighfaaruib’raahima) for his father was only because of a promise he made to him. But when it became clear that he was an enemy of God, he disowned him. Indeed, Abraham was compassionate, clement.

[11:3] “And that you shall ask forgiveness of your Lord (is’taghfiroo rabbakum), then repent to Him; He will let you enjoy a good (provision) until an appointed term and He gives His grace to everyone who deserves grace. And if you turn away, then indeed, I fear for you the retribution of a terrible day!”

[11:52] “O my people, ask forgiveness of your Lord (is’taghfiroo rabbakum), then repent to Him. He will then send upon you from the sky abundance, and will increase your strength. And do not turn away as criminals.”
Note: Those who ask forgiveness of their Lord and repent to Him, He will allow them to enjoy His provision until an appointed term.

[11:61] And to Thamud was sent their brother Saleh. He said: “My people, worship God, you have no god besides Him. He created you from the earth and established you in it, so ask His forgiveness (fa-is’taghfiroohu), then repent to Him. My Lord is Near, Responsive (qareebun mujeebun).”
Note: The messenger sent to Thamud said to his people to worship God alone as well as to ask His forgiveness and repent to Him.

[18:55] And what prevented the people from believing when the guidancecame to them, and to ask forgiveness of their Lord (wa-yastaghfiroo rabbahum), except that the way of the earlier generations, or the retribution that came to them before?

[19:47] He said: “Peace be upon you, I will ask forgiveness of my Lordfor you(sa-astaghfiru laka rabbee). Indeed, He has been most kind to me.”
Note: This statement was a promise of Abraham that he made to ask forgiveness of his Lord for his father when his father let him know that he will stone him unless he would stop saying of worshiping God instead of idols.

[24:62] The true believers are those who believe in God and His messenger, and when they are with him for a matter of group action, they do not leave without asking his permission. Those who ask your permission do believe in God and His messenger. So when they ask your permission for some of their affairs, then you may give permission to whomever you wish of them, and ask forgiveness of God for them (wa-istaghfir lahumu allah). Indeed, God is Forgiving, Merciful (ghafoorun raheemun).

[27:46] He said, “O my people, why do you hasten to do the evil before the good? Why do you not ask forgiveness of God (lawlaa tastaghfiroona allah) so that you may have mercy?”

[38:24] He said: “He has wronged you by asking your sheep with his sheep. And many of the partners take advantage over others, except those who believe and do righteous works, but they are very few.”And David thought that we had tested him, so he asked forgiveness of his Lord (fa-istaghfara rabbahu), and fell down kneeling, and repented.

[40:7] Those who carry the throne and those who are around it glorify with praise of their Lord, and believe in Him, and they ask forgiveness for those who have believed (wa-yastaghfiroo lilladheena aamanoo): “Our Lord, You encompass all things with mercy and knowledge, so forgive those who repented and followed Your path, and spare them the punishment of the Hellfire (al-jaheemi).”

[40:55] So, be patient, God’s promise is true, and ask forgiveness for your sin (wa-istaghfir lidhanbika), and glorify with praise of your Lord in the evening and the morning.

[42:5] The heavens nearly shatter from above them, and the angels glorify with praiseof their Lord, and they ask forgiveness for those in the earth (wa-yastaghfiroona liman fee al-ardi). Surely, God is the Forgiving, the Most Merciful (al-ghafooru al-raheemu).

[47:19] Therefore, you (Muhammad) shall know that there is no god besides God, and ask forgiveness of your sins and of the believing men as well as the believing women (wa-is’taghfir lidhanbika wa-lilmu’mineena wal-mu’minaati). And God is aware of your endeavor and attainment.

[48:11] Those who lagged behind of the Arabs will say to you, “Our properties and our families kept us busy, so ask forgiveness for us (fa-is’taghfir lanaa)!” They say with their tongues what is not in their hearts. Say, “Then who has power for you against God in anything, if He intends any harm for you, or He intends any benefit for you?” No, God is fully aware of what you do.

[51:18] And in the morning they would ask forgiveness (hum yastaghfiroona).

[60:4] There is a good example set for you by Abraham and those with him when they said to their people: “We disown you and the idols that you worship besides God. We reject you, and you will see nothing from us except animosity and hatred until you believe in God alone.” Except for the saying of Abraham to his father: “I will ask forgiveness for you (la-astaghfaranna laka), but I do not have any power for you from God.” “Our Lord, we trust in You, and we turn to You; to You is the final destiny.”
Note: Abraham set a good example disowning the idol worshipers by establishing animosity and hatred with them while his asking forgiveness of God for his father who was an idol worshiper, was forgiven being just his saying to his father.

[60:12] O you prophet, when the believing women come to you upon pledging to you that they will not associate anything with God, nor will they steal, nor will they commit adultery, nor will they kill their children, nor will they bring with any falsehood they invent, nor will they disobey you in any fact, then you shall accept their pledge, and ask forgiveness of God for them (wa-istaghfir lahunna allah). Indeed, God is Forgiving, Merciful (ghafoorun raheemun).

[71:10] Then I said: “Ask forgiveness of your Lord (is’taghfiroo rabbakum); indeed, He is Forgiving (ghaffaran).”

[73:20] Indeed, your Lord knows that you spend a little less than two-thirds of the night, or half of it, or one-third of it, and so do a group of those who are with you. And God defines the night and the day, and He knows that you cannot always do this. So He has turned to you, then you shall read what you can of the Quran. He knows that some of you may be ill, others may be traveling in the land seeking God’s bounty, and others may be fighting in the way of God. So you shall read what you can of it, and observe the Contact Prayer(Salat), give the obligatory charity (Zakat), and lend God a loan of righteousness. Whatever good you send ahead for yourselves, you will find it at God; it is far better and greater reward. And ask forgiveness of God (wa-istaghfiroo allah). Indeed, God is Forgiving, Merciful (ghafoorun raheemun).

[110:3] Then you shall glorify with praise of your Lord, and ask His forgiveness (wa-is’taghfir’hu). Indeed, He is Redeemer (tawwaaban).

Out of 41 instances in 37 verses across 24 suras, 33 instances found in 32 verses across 22 suras participate in the mathematical confirmation. If the relevant sura and verse numbers are added, the total is a multiple of 19 =>2470 = 19x130 (see the table below for details): 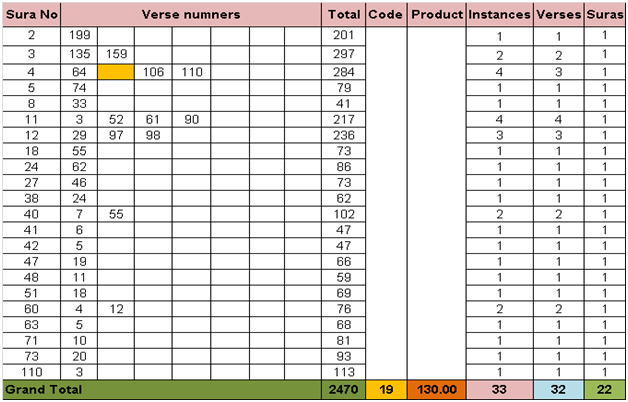 Note: The instances, tastaghfir in 9:80, yastaghfiroo in 9:113, istighfaaru in 9:114, astaghfiru in 19:47, and astaghfarta and tastaghfir in 63:6 are not in the mathematical confirmation as the people who have been addressed in these instances do not deserve God’s forgiveness. God will not forgive those who disbelieve in God and His messenger, even if His forgiveness for them are asked for seventy times as they are the wicked people (9:80). The prophet and those who believe with him should not ask His forgiveness for the idol worshipers, even if they are their close relatives as they are the dwellers of the Hell (9:113). God will not forgive the hypocrites whether the prophet ask His forgiveness for them or not as they are arrogant and God does not guide them being wicked (63:6). Abraham asked forgiveness of God for his father except that he made a promise to him to do that but God would not accept it as Abraham’s father was an idol worshiper (9:114 and 19:47) while his asking forgiveness of God for his father was forgiven being just his saying to his father as reflected in (60:4), is in the mathematical confirmation makes it clear.

Even there is a mathematical confirmation from the derived instances of “Is’taghfara” along with “Is’tigh’far” to make it clear that the righteous would ask forgiveness of God for themselves as well as for the other believers but for sure, not for the disbelievers or the idol worshipers being aware of positive and negative contribution to their souls. Despite, God being Forgiving and Merciful, He will not forgive our sins or guide us unless we make our all efforts to lead a righteous life to be eligible for it what He teaches us. Hence, asking forgiveness of God is an opportunity for us, and if we understand it thoroughly studying His final scripture and apply it in an appropriate manner avoiding all emotion and misconception we may be able to secure our journey that starts at the time of death but continues until the Day of Judgment followed by the Resurrection to receive our final and everlasting reward being a great triumph on behalf of ourselves, i.e., our souls.
Peaceful Friday, salaam and God bless.
Tafazzal (10/27/2017).