The review of instances of “islaam” and “muslim” together confirms that those who follow Islam are Muslims, spelling out that believing in God and His messenger mean to uphold His words is the way to become submitters to God to be eligible for recompose from Him. Here is the review of instances of “salaam” meaning “peace” in the Quran together with the instances of “islaam” to understand that Islam is a religion of God with a set of beliefs and practices defined and perfected by God to lead a life with peace on earth as well as to achieve the abode of peace is a success of every Muslim.

[3:19] Indeed, the religion with God is submission (al-islaamu), and those who received the scripture did not dispute except after the knowledge came to them out of jealousy between them. And whoever rejects God’s revelations, then God is swift in reckoning.
[3:85] And whoever seeks other than submission (al-islaami) as a religion, will not be accepted from him, and in the Hereafter he will be with the losers.
[5:3] Forbidden upon you the dead animal, and the blood, and the meat of pig, and what was sacrificed to other than God; and that which has been strangled, and that which has been beaten to death, and that which has fallen from a height, and that which has been gored, and that which the wild animals have attacked except what has been slaughtered (before it dies), and what has been slaughtered on the alters, and that you divide by the arrows of chance – that are all abominable. Today, those who disbelieved have given up from your religion, so do not fear them, but fear Me. Today, I have perfected your religion for you, and have completed My blessings upon you, and have chosen submission (al-islaama) as a religion for you. So, whoever is forced by severe hunger and not being willful to sin, then God is Forgiving, Merciful.
[6:125] So whoever God wishes to guide, He will open his chest towards submission (lilislaami); and whoever He wishes to misguide, He will make his chest tight and constricted, as one who is climbing towards the sky. It is such that God afflicts those who do not believe.
[9:74] They swear by God that they did not say, while they said a word of disbelief and they disbelieved after their submission (islaamihim), and they planned of what they could not attain; and they could not take revenge except that God and His messenger had enriched them from His bounty. If they repent, it will be better for them, but if they turn away, then God will punish them a painful punishment in this world and the Hereafter, and they will have no protector nor a helper in the earth.
[39:22] Is it not the one who opens his chest for submission (lilislaami), then he will be on a light from his Lord?. So woe to those whose hearts are hardened from remembering God. They are in far astray.
[49:17] They consider a favor on you (Muhammad) that they have submitted. Say, “You should not consider your submission (islaamakum) a favor on me. No, God has bestowed a favor upon you that He has guided you to the faith, if you have been truthful.”
[61:7] And who is more evil than one who fabricates lies about God, and he is invited to submission (al-islaami)? And God does not guide the evil people.

Here is the summary of God’s teachings that we can learn from the occurrences of “salaam” and “salam” in the Quran to understand that God is the source of peace and He provides it whomever He wills, can be achieved through the righteous works while it is commonly used in our greeting:

50 instances of both “salaam” and “salam” along with 8 instances of “islaam” found in 55 verses across 33 suras participate in the mathematical confirmation. The total of the relevant sura and verse number is a multiple of 19 =>4180 = 19x220 (see the table below for details): 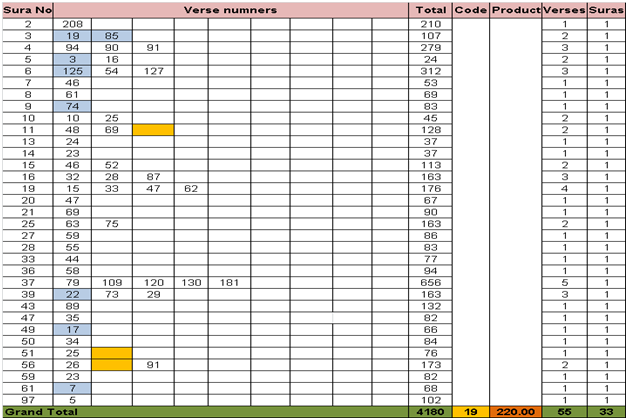 Note: This mathematical confirmation establishes a direct relationship between “islam” and “salaam” to understand that those who follow Islam (submission) to be driven to Paradise wherein its guards will greet its dwellers, “Peace be upon you.” The instances of “strong>islam” are highlighted blue in the table while the presence of more than one instance in the same verse is highlighted orange.

“Salaam” can be understood being freedom from violence, cessation of war, tranquility, security, success etc. in different contexts but peace is an accurate translation of the term. Both “salaam” and “salam” mean peace while the uses of “salam” in the unusual contexts. However, peace is directly related to the actions and attitudes of individuals; but it is ultimately a blessing from God while its uses are found in greeting, inspired blessing from God and linking with special events.

God has commanded the believers to defeat the Satan to achieve the perfect peace with Him. He wants His believers not to make any hardship in the way of those who offer peace or not to say those who were not with them that you are not believers just for seeking the gains of the worldly life. If they incline to the peace, then you shall incline to it as well and put your trust in God. Those who were with the believers to secure them from their own people but found them betrayer could be taken captives or could be killed wherever they are found. God guides those who seek His pleasure to the ways of the peace and brings them out of the darkness into the light. Thus, anyone can attain the abode of the peace at his Lord through righteous behavior and works.

Those who believe their greeting is “Peace.” Muhammad was commanded to say, “Peace be upon you” to those who came to him believing in the revelation of God. On the day of Judgment the people on the elevated platform will recognize all by their marks and will call the anticipated dwellers of Paradise, “Peace be upon you.”The greeting of those who believe is “Peace” while their prayer is “Glory be to You, O God” and the ultimate prayer is “Praise be to God, Lord of the universe.” When messengers from God (angels) came to Abraham said to him “Peace” and he answered it. When the angels put the wicked to death, the wicked would say, “Peace and we are not doing wrong.” On the day of judgment, they would say peace to God when they had lost those what they used to invent. When the angels put the righteous to death, would say to them, “Peace be upon you, enter Paradise. They walk humbly on earth and say “peace” when they speak to the ignorant. When they hear the vain talk, turn away from it and say, “Peace be upon you, we do not seek the ignorant.” When Moses and Aaron came to Pharaoh said peace to those who follow the guidance. Those who reverenced their Lord will be driven to Paradise and its guards will greet them, “Peace be upon you, you have done well. So, enter it to abide for forever.” Abraham said to his father, “Peace be upon you, I would ask forgiveness of God for you”.

Peace is one of the attributes of God, and it is an inspired blessing from Him. He has blessed the night with peace the whole Quran was placed in Muhammad’s soul. The Fire was said to be comfort and peace upon Abraham. It is said, “Peace be upon to His servants whom He has chosen as well as all the messengers.” It is cited in an example as a symbolic representation for us not to associate any partners with our Lord or with His source. Thus, those who glorify Him alone will have peace and an honorable recompense when they meet Him. On the day of eternity (judgment) the righteous will be invited to enter Paradise with peace and they will not hear any nonsense except peace therein.

This study including mathematical confirmation confirms that the derived message from the instances of “salaam” is quite different from that of the instances of “islaam”. Since the appropriate meaning of “salaam” is “Peace”, and its consistency is also found with the same meaning of Hebrew counterpart “Shalom”, the translation of any instances of salaam (peace) to submission (Islam) or “salaam” means submission would be misinterpretation even though the messages are closely related. Hence, Islam is a religion of peace wherein there is no place of violation or injustice, ensures our peace on earth as well as leads us to the abode of peace being blessed by God if it is followed as reflected in the final reminder revealed in the night blessed with peace (44:3 and 97:5).
Peaceful Friday, salaam and God bless.
Tafazzal (11/24/2017)