God has created humans to worship Him (51:56) and has given Islam as a religion for them (3:19, 3:83, 3:85) and has updated it from time to time to fit it to the generations of people accompanied the human civilization on earth (42:13), the testing place for humans (11:7, 2:30). The update has been made through sending down His guidance to humanity to lead it to the right path due to its deviation and misguidance (35:32). Eventually, He has given us the Quran confirming and consolidating the previous scripture (5:48), and the final edition of the scripture (33:40) perfecting His religion and completing His blessing upon humanity (5:3, 22:78) to serve as guidance until the end of the world (2:2, 2:185). While He has made His religion to prevail over any other religions (9:33, 48:28, 61:9), even today, when there are about 4,300 religions or religious faiths around us according to a survey of adherents.com. 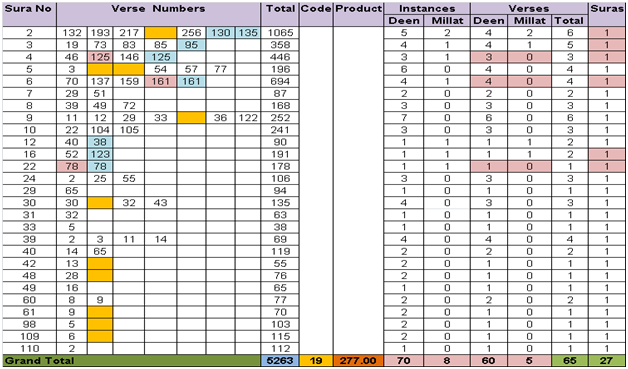 Note: The appropriate details of God’s religion and its authorized practicefound in 65 verses across 27 and the mathematical confirmation establishes the relationship between the religion given by God (deen) and the religion to be practiced by people without any change to it (millat). In the table, the instances of “millat” are blue while the pink indicates instances of “deen” with “millat” in the same verses and suras, and the orange indicates duplicate instances of “deen” in the same verses not in calculation as ground rule of mathematical confirmation.

Aslama means to submit in the verb form while Islam means submission in the verbal noun form in the Quran provide an accurate definition of Islam, stating the core message mentioned below supported by the mathematical confirmation: 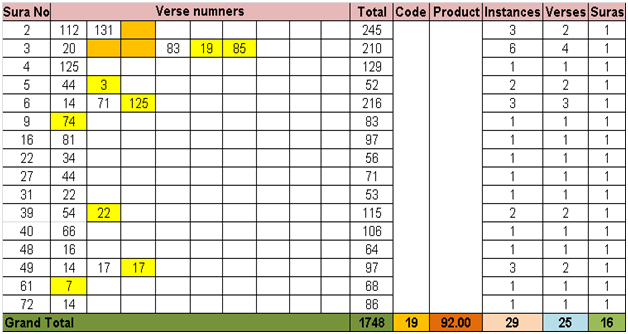 Note: This mathematical confirmation establishes a direct relationship between the instances of “aslama” and that of “Islaam” to indicate that “Islaam” is derived from the root word “aslama” to eliminate any doubt about it. The instance of “aslamaa” in 37:103 is not in the mathematical calculation for not reflecting to submit to the good will of God nor in obedience of His law rather than an attempt of sacrifice to fulfill the dream. The instances of “Islaam” are highlighted yellow in the table while the presence of more than one instance in the same verse are highlighted orange.

Muslim means submitter in the active participle form while Islam means submission in the verbal noun form in the Quran provide us an exact definition of Muslim conveying the key message stated below supported by the mathematical confirmation: 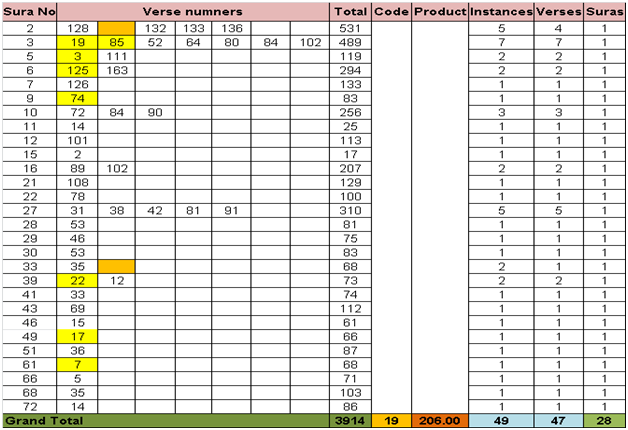 Salaam means peace in the noun form while Islam means submission in the verbal noun form in the Quran provide details for us to achieve perfect peace on earth as well as in the hereafter focusing on the following supported by the mathematical confirmation: 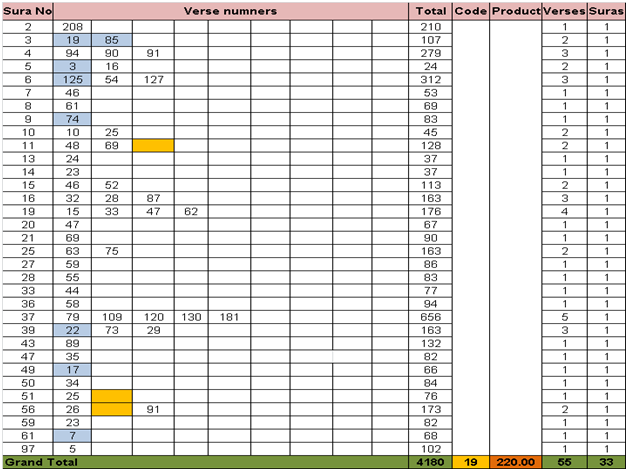 Note: This mathematical confirmation establishes a direct relationship between “Islaam” and “Salaam” to understand that Islam is a religion of peace and those who follow it to be driven to Paradise wherein its guards will greet its dwellers, “Peace be upon you.” The instances of “Islaam” are highlighted blue in the table while the presence of more than one instance in the same verse is highlighted orange.

God has decreed religion for us and has placed no hardship on us to practice it as a constant worship of Him to receive full recompense on the Day of Judgment. He has blessed us to confirm it, what has been coded in 2 Arabic words, “deen” and “millat” in the Quran. He has defined it with the word, “deen” while “millat” is used to let us know from the perspective of its practice by people to eliminate any confusion to be a religion of Abraham or introduced by any human being. He has made His religion prevail over any other religions through sending His messenger with His guidance and religion while Muhammad was commanded to follow the religion of Abraham. However, God wants us to practice it being sincere, devoted it to Him instead of taking it as a play and amusement.

Islam is derived from the root word “Aslama” meaning to submit to the Lord of the universe, and its noun form is “Islaam” meaning submission to God, which is very straightforward while there is another opinion around us that it is derived from the Arabic root “Salema” meaning peace, purity, submission, obedience etc., is not explicit. God has not only given us accurate definition of Islam to be practices of His religion, Monotheism but He has also confirmed us that if anyone seeks other than Islam will not be accepted from him. However, we are to submit to Him and to be obedient to His laws to be guided to the right path.

“Islaam” means submission and “Muslim” means submitter. God has commanded us to believe in Him and in what was revealed to His prophets and messengers, and not to make any distinction between any of His messengers to be submitters. He has sent down the scripture to clarify everything and as a guidance, mercy and good news for the submitters. Those who believe in God and His messenger would bear witness that they are submitters while the submitters are those who believe in God’s revelation. Thus, believing in God and His messenger as well as recognizing and upholding His words in each divine message given to the people of the respective period of guidance while Quran, the confirming and consolidating as well as the final message is given us to achieve the goal of righteousness being submitters to God to be eligible for recompose from Him.

“Salaam” means peace while Islam is a religion of peace. Peace is our greeting while it is one of the attributes of God and an inspired blessing from Him. He has blessed all His chosen and messengers with it, and also those who glorify Him alone, will be invited to enter Paradise with peace when they meet Him. The Fire was said to be comfort and peace upon Abraham when he was placed in fire, while the night, the whole Quran was placed in Muhammad’s soul has been blessed with peace to guide humanity until the end of the world. Since the Quran advocates total freedom, tolerance, perfect peace and justice, and so does Islam, there is no place of violence, aggression, oppression or terrorism in it. But it is unfortunate that violence or terrorism has got an attention of media due to evil and selfish goal of some people or organizations who abuse Islam quoting certain verses of the Quran out of context.
Peaceful Friday, Salaam and God bless.
Tafazzal (12/1/2017).