God has created us and He wants us to appreciative to Him for our own sake. So, He only knows how we can appreciative to Him, and has given us the ways and the tools to do that. If we use His given ways and tools, there is a guarantee of our safe return to Him. Thus, in all our circumstances, what should we expect is His guidance to ensure our safer return keeping in mind that we already missed two chances in the heavenly life while He has granted us another, which is the last chance on earth to attain and get back with the eternal peace and contentment.

God’s guidance is the true guidance (2:120 and 6:71) and He guides those to a straight path who believe in His guidance sent down to us (22:54). He increases the guidance of those who are guided (19:76) and has made it clear that we cannot guide anyone we love while He is aware of the guided ones (28:56). When both Adam and his wife transgressed in Heaven, were granted the last chance on earth to be redeemed and asked them to wait for His guidance to come and follow it not to go astray 2:38, 20:123-124:
[2:120] Neither the Jews, nor the Christians, will accept you (prophet), unless you follow their religion. Say, “God’s guidance is the true guidance.” And if you had followed their wishes after what has come to you of the knowledge, there is not a protector nor a helper for you against God.
[6:71] Say: “Can we call on other than God what cannot benefit us or harm us, and we can turn back on our heels after God has guided us?” Like the one whom the devils have enticed to confusion in the earth, he has friends who call him to the guidance: “Come to us!” Say, “God’s guidance is the true guidance. Indeed, we have been to submit to Lord of the worlds.”
[22:54] And that it may know those who have been given the knowledge that it is the truth from your Lord, so they believe in it, then it may be humble their hearts to it. And indeed, God guides those who have believed to a straight path.
Note: We must soften our hearts to accept the truth by removing the hardening in our hearts and take initiatives to make our life happier when we meet Him.
[19:76] And God increases guidance of those who have accepted guidance, and the everlasting good deeds are better for reward with your Lord and are better for return.
Note: Here is an indication of the gradual growth of our souls through contribution of our good works.
[28:56] Indeed, you (prophet) cannot guide whomever you love. But God guides whomever He wills, and He is Knower of the guided ones.
Note: Even though it comes in reference to the prophet but it is also applicable to anyone of us who may advocate truth while its acceptance or rejection depends on God as He knows what is in everybody’s heart and who deserve guidance.

Quran is a reminder for the worlds 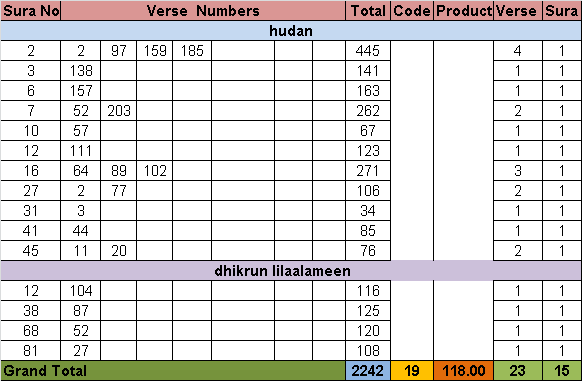 Note: Participation of both sets in the mathematical confirmation is an interpretation of the commandment from God that the Quran is a guidance for the people as well as a reminder for the world that we must follow it without any doubt to stay in a straight path to see our success in the Hereafter. There is also additional confirmation from the sum of total verse and sura # is a multiple of 19 => 23 + 15 = 38 = 19x2.

God has given us Quran and has assigned it many attributes including 4 of His own attributes such as honorable, wise, glorious and great as well as mentioning it a revelation from Him and a confirming scripture to stay in a straight path. The other common attributes of it are guidance, reminder, messenger, warner, bearer of good news, mercy and healing for the believers. However, its role as a guidance and a reminder is very important for all of us so that we can make our all efforts to understand and follow it to stay in a straight path leading a righteous life according to His teachings as given in it. The Quran has completed the God’s religion correcting, updating and restoring the parts of those practices that had been distorted over the period of time down the generations up to prophet’s time. In addition, Quran being the final scripture, God’s laws and teachings are updated through it to fit them for all generations of people until the end of the world. On the other hand, it was coded with information and instructions to facilitate, even any distortion of those practices down the generations to be detected and restored back after its revelation.

The Gabriel brought down the Quran with truth, enlightenments and detailed explanation of everything to be a guidance for people and a reminder for the world. Thus, Quran to be our guidance is a treasure of our knowledge, and we may reveal a new information from it every time if we study, examine and inquire into it to address our concerns and questions at all times until the end of the world. Since it has been confirmed from the review of the pertinent verses that the Quran is a guidance for the people as well as a reminder for the world, we must soften our hearts to accept it a guidance of God without any doubt and follow it to stay in a straight path to see our success in the Hereafter.
Peaceful Friday, salaam and God bless.
Tafazzal (3/10/2017).