Zakat (obligatory charity) and sadaqah (charity) have been mentioned many times in the Quran. Both Zakat and Sadaqah are what we spend for others from the provisions given to us. God has ordered us to spend a definite portion of our income as Zakat while as much as we can afford from our savings as Sadaqah in the cause of God. Here is an overview on Zakat and Sadaqah in light of the Quran:

Zakat, an obligatory charity, is one of the major duties required by God from all of His Submitters (Muslimeen in Arabic). It follows the pattern of all rituals of Submission (Islam in Arabic) as given to prophet Abraham that handed down to us and existed when the Quran was revealed to prophet Muhammad:

[7:156] And decree (Moses) for us goodness in this world, and in the Hereafter. Indeed, we have turned to You.” He (God) said, “My punishment – I afflict with it (punishment) whomever I will, while My mercy has encompassed all things. So, I will decree it (mercy) for those who fear Me and give the Obligatory Charity (al-zakata), and those who – they believe in our revelations
[19:31] “And He made me (Jesus) blessed wherever I am, and enjoined me with the Contact Prayer (bil-salati) and the Obligatory Charity (wal-zakati) for as long as I am alive.”
[19:55] He (Ismael) used to enjoin his family with the Contact Prayer (bil-salati) and the obligatory charity (wal-zakati); he was acceptable to his Lord.
[21:73] And we made them leaders who guide by our command, and we inspired (wa-awhaynaa) to them doing of the good works and observance of the Contact Prayer (wa-iqaama al-salata) and giving of the Obligatory Charity (wa-itaa-a al-zakata), and they were worshipers to us.
[22:78] And you shall strive in the cause of God as you should strive for His cause. He has chosen you and has placed no hardship on you in the religion – the religion of your father Abraham. He named you submitters from before and in this that the messenger may be a witness among you, and you may be witnesses among the people. So you shall observe the Contact Prayer (fa-aqeemuu al-salata) and give the Obligatory Charity (wa-aatuu al-zakata), and hold fast to God; He is your Protector, the best Protector and the best Supporter.

Who has to pay Zakat

Anyone who has any income must pay the Zakat. Verse 3:134 says “who give to charity during the good times, as well as the bad times………. God loves the pious” which indicates that our obligations are to be fulfilled at any circumstances irrespective of high or low income. In addition, the people who may not have any income at some point in their life, but they may have income in the other form such as Zakat from which he is also obligated to give away to another needy people as his/her part of Zakat.

When Zakat is to be paid

Per verse 51:19, Zakat being a recognized right in wealth is due when anyone has any income. We may pay it immediately or set aside for the specified recipients to pay it later. Verse 6:141 indicates that giving away on the day of income is the opportunity given to us by God to be a trait of the righteous that may be achieved over time. The wisdom behind Quranic law that Zakat has to be paid as soon as the money is earned which is in total agreement with modern economic and monetary theory, which states that the circulation of money is a vital factor for the prosperity of any economy when it is paid immediately and put in circulation, than stacking away and paying at the end of the year.

Amount of Zakat to be paid

Per verse 70:24, Zakat must be calculated based on known duty (Haqqun Ma’luum) and given away on a regular basis whenever we receive any income. The Arabic words, “Haqqun” means duty or right and “Ma’luumun” means known. This is the only known amount mentioned in the Quran. When God has said “Known” it does means that it was known to the believers during the revelation of the Quran. Thus, the existing rate of 2.5% was passed down to us, generation after generation, like other religious rites, from the time of Abraham to our time. In other words, Zakat percentage was known at the time of prophet Muhammad, and did not necessitate any correction by God in the Quran. We, therefore, must set aside and give it to the specified recipients immediately.

Who are the recipients of Zakat

While God set the obligatory percentage for Zakat on any income we receive, and He also left the door open for more charitable works, to give the righteous a chance to earn even more credits by paying more to charity. Verse 2:261 states “The example of those who spend their monies in the cause of God is that of a grain that produces seven spikes, with a hundred grains in each spike. God multiplies this manifold for whomever He wills. God is Bounteous, Knower”. The recipients of charity are clearly mentioned in 9:60, 2:177 and 2:273 – they are the poor, the needy, the workers who collect them, the new converts, to free the slaves, those who are burdened by sudden expenses, in the cause of God, and the travelling alien, the poor who are suffering in the cause of God and cannot emigrate, relatives, the orphans, and the beggars. Per verse 2:219, charity is to be given if you have an excess amount – they also ask you what to give to charity: say, “The excess,” and anyone who forbids charity is a disbeliever (107:7) which indicates that God has encouraged us to give to charity to earn more credits with Him.

Verses of Anfaqa, Sadaqah and Zakat in the Quran

When we study all the verses in the Quran about Zakat and other types of charity, we realize that Zakat cannot possibly be from “the excess”. Instead, we learn that it is a known percentage (70:24), which is to be paid out on the same day we receive any income (6:141). We also see that Zakat is specifically mentioned by name (Zakat) or expressed as “Haqqun” meaning “duty” or “Haqqun ma’luum” meaning “known duty” and also occasionally referred to “Unfiquun” (Anfaqa), meaning “to spend,” as in 2:215 and 3:134.

Verses, 2:215 and 2:219 speak about Zakat and charity respectively, using the same term “Unfiquun” meaning to spend for others. Although the same word is being used for other charities as in 2:219, the amount is specifically defined in the verse as being the Arabic word, “afw” meaning “the excess” which clearly indicates that it is not obligatory.

It is noteworthy that the importance of observing Zakat (7:156) has first been mentioned in revelation order 39 (sura 7: Al-A’araf) and its integral components are detailed out in the subsequent revelations. In shaa allah we also know that the verse 23 of the same sura (7:23) is linked with the mathematical confirmation of Adam’s as well as ours redemption reciting only sura Al-Fatehah in every rakah during observing our Salat. Thus, the commandment of observing Zakat down in the suras indicates that Salat and Zakat are closely associated, and we cannot even think of our successful return to God without through proper practicing of these two rites. 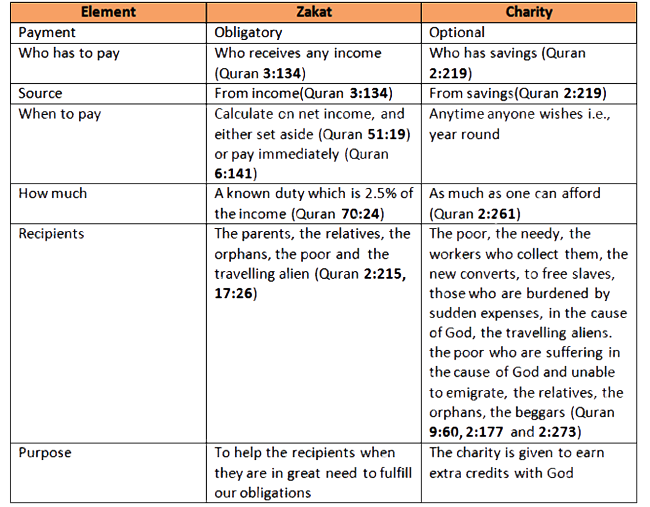 The references of Zakat are found in 31 verses of 19 suras. If the relevant sura and verse numbers are added, the total is 2394 which is a multiple of 19 => 2394 = 19x126. This mathematical interpretation confirms that Muslims are required to fulfill this obligation at any circumstances. The table below depicts the detail: 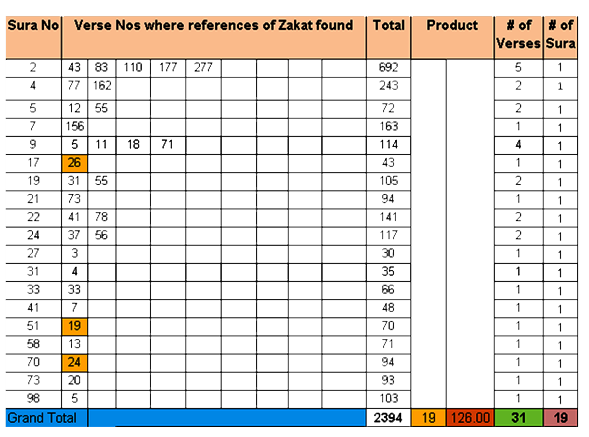 ​Note: The instance of “Zakat” found in 23:4 and the instances of “Haqqahu” found in 6:141 and 30:38 are not in the mathematical calculation being the traits of a righteous which are opportunities for the righteous given by God that can be achieved over time. In addition, there are three other instances of Zakat found in (18:81, 19:13 and 30:39) that do not participate in the mathematical confirmation as well. The instances in (18:81 and 19:13) do not talk about giving away at all while the instance in (30:39) talks about the increasing of one’s wealth manifold through the charity in reference to the usury.

God has decreed Zakat for us to pay from the provisions as given to us, and He has also explained the method of fulfilling this obligation as found in 31 verses in the Quran even confirming with the Quran’s mathematical code (74:30) so that we can do it in a right way. Since there is NOT a single verse in the Quran that gives any concessions in Zakat to any person who has a low income, the one who has a low income, if he still obeys God’s law in Zakat, in that is his test as we are all given tests, some in plenty (like Solomon) and some in little (like Job). God is aware of our needs and our circumstances in all situations, we must always follow His law, and exercise patience.

To help overcome our natural stinginess, God decreed Zakat (obligatory charity), 2.5 percent of net income. This is to be given as soon as we receive income or set aside if the recipients are not immediately available, and it’s to be given to those who are in real need starting with our own family. If the world followed this system, with everyone helping out his or her relatives, there would be no poverty.

While God set the obligatory percentage for Zakat on any income we receive, He also left the door open for more charitable works, to give the righteous a chance to earn even more credits – up to 700 times by paying more to charity (2:261 and 30:39). Thus, we are encouraged to help others as much as we can from our savings without being extravagant.
Peaceful Friday, salaam and God bless.
Tafazzal (10/24/2014)