Prophet Muhammad was the first who wrote down the Quran revealed to him. He also had other scribes helping him in the writing. He had to be a literate man to be sure that any unusual words, like Becca, for example or any unusual use of a letter like a subtle yaa, an alif, a closed Taa or open Taa,….etc. that are used in the proper way and place. When Muhammad died, the whole Quran was completely written down, although not in one book, but rather on pieces of woods, papers, palm leaves, animal skin, bones…etc. Muhammad also left clear instructions of the order of placing the suras (chapters) of the Quran including their names, the beginning and end of each verse and sura and the absence of Basmallah from the top of sura 9. It was the first Khalifa, Abu Bakr who collected the Quran into one book and the manuscript on which the Qur’an was collected, remained with Abu Bakr and then with Umar (the second Khalifa), and after him, it remained with Hafsa, ‘Umar’s daughter and one of the Prophet’s wives. It is from that copy, Uthman, the third Khalifa was supposed to make other copies to distribute to different regions of the Islamic Empire. But one of the scribes suggested adding couple of verses to honor the Prophet and the majority of them agreed despite Ali’s protest and his protest is documented in different references. Thus, the Word of God was distorted just after 19 years of the death of Prophet Muhammad and the whole world was deprived of the pure Quran until 1974. However, Uthman returned Hafsa’s copy of the Quran to her, which was later burned by Marwan b. Hakam (d.65/684), the first peacetime ruler after the end of 50-year war between two parties of Muslims (battle of Karbala). It has always been a question for many until recently that if the copies available to Marwan B. Hakam were the same like Muhammad’s own copy that Hafsa’s had, it would be no problem. These copies differed and caused M.B. Hakam a lot of political unrest, therefore he ended this turmoil by burning the ONLY copy left for the Muslims by the prophet Muhammad. Burning of Hafsa’s copy was the last chapter in covering up the addition of two false verses in sura 9 as was discovered later. However, of the copies made by Uthman, two still exist to our day. One is in the city of Tashkent (Uzbekistan) and the second one is in Istanbul (Turkey). From these oldest copies more copies were made and distributed throughout the world.

The Reform of Arabic Script

The first writings of the Quran were simple Kufic writing but with the increasing number of non-Arab Muslims, there was a greater need for facilitating reading and learning of Arabic. Here is a page from the copy of the Holy Qur’an, from the time of Caliph Uthman, kept in Tashkent (verses 86-87 of Sura 7 ). The red line is added to mark that part of verse 86 that appears in the image while the red square is added to mark the beginning of the verse 87: 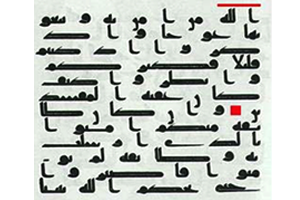 Since several letters of the Arabic alphabet share the same shapes, and since vowels are not clearly indicated, some reform was needed to avoid confusion, and a system of Naqt or I’jam (letter-pointing), and Tashkeel (vowel indication) was developed. Abul Aswad al Du’ali (d. 688) was the legendary founder of Arabic grammar, and is credited with inventing the system of placing large colored dots to indicate the Tashkeel. It was used with the Kufic scripts, but proved to be somewhat cumbersome to use with smaller scripts, or in ordinary writing. The Ummayad governor Al Hajjaj ibn Yusuf al Thaqafi enforced a uniform system to distinguish letters by using dots, which he asked two of al Du’ali’s students to codify. Al Khalil ibn Ahmad al Farahidi (d. 786) devised a Tashkeel system to replace Abul Aswad’s. Al-Farahidi introduced vowel signs inspired by the initial shape or parts of certain letters. The sign ‘hamza,’ for example, is part of the letter ‘ayn’ (without its end-tail).

His system was universally used since the early eleventh century, and included six diacritical marks (are used to change the sound-values of the letters to which they are added, which may appear above or below a letter): Fathah (a), Dammah (u), Kasrah, Sukun (vowelless), Shaddah (double consonant), and Maddah (vowel prolongation) which is applied to the Alef, which are symbols added to letters of the alphabet to indicate different pronunciation than the letters are usually given.

It was not until the year 1918 when the Muslim scholars, gathered in Cairo, Egypt, and decided to write a standardized edition of the Quran that avoids all the obvious scribes’ errors in different editions of the Quran floating in the world and to standardize the numbering of the suras and verses of the Quran. In 1924, they produced the edition of the Quran that later became the standard edition around the world. They depended mainly on the oral transmission of the Quran to correct all the contradiction seen in the different Rasm (Orthography) and numbering of different Qurans. Their choices, and decisions of how to write certain words, and to number the suras and verses, except for few human errors, proved to be God guided and “not on their own” effort although it may seem so to the outsiders. This becomes very clear when you study their choice of the standardized numbering of the suras and verses and the writing of certain Arabic letters like the Alif (Alef), the Taa, the Yaa and the subtle Yaa as we will explain later and as proved by the mathematical miracle of the Quran.

In fact, in a complete comparison of the Turkish and the Egyptian editions texts we find some 5300 ‘short strokes’ in the 1924 Egyptian text, in places where the Turkish text has consonantal symbol alifs. Yet, there are about the same number of places again where both texts contain ‘short strokes’, and they apparently agree on these. Thus, the 1924 has over 9, 000 such ‘strokes’ altogether!

By comparison, between the Taj (as in the Swahili) text from Karachi and the 1975 Islamic Foundation (’83 Amana) text, itself bearing the Egyptian ‘Uthmanic graphic form ‘, there are only about 1600 such places where the Taj text contains graphic alifs and the Egyptian text contains ‘short strokes’.

Another edition of the Quran appeared in 1405/1985 in Saudi Arabia, King Fahd edition, ‘Mushaf al-Madinah’ that was very similar to the Egyptian edition and has also been distributed throughout the world.

However, all the changes that took place in the 1924 Egyptian edition, were all in God’s planning. This happened in Egypt before 50 years of the discovery of the mathematical coding of the Quran while the Egyptian man, Dr. Rashad Khalifa was destined to unveil the mathematical coding of the Quran. God was preparing the world to receive what He calls “One of the great miracles” 74:35. This also has to happen right before the computers take over the world and become a household item. This discovery proved that the changes made in 1924 edition was divinely guided. It also proved the significance of the oral transmission of the Quran in preserving that Holy book.

Discovery of mathematical coding of Quran

[Quran 74:30] Over it is nineteen.
[Quran 15:9] Indeed, we have revealed the reminder, and indeed, we will certainly be protector of it.

Since the discovery of mathematical coding of the Quran was destined for 1400 years later and the reform of the Arabic script was actually allowed over a long period of time to prepare for the appearance of God’s miracle of the Quran. The complexity of the miracle would not be understood by these early generations of Muslims and the miracle was destined for the people of the computer era. Muhammad and many generations after him would not grasp the mathematical formulas that needed a computer to present to the world. That was also a reason the text of the early Quran did not have all that was involved in the miracle as the Hamzas, the dagger alifs (superscript alifs), the numbering of the verses and suras.

Dr. Rashad Khalifa, 50 years after the 1924 standardized edition of the Quran, was inpired by God to unveil the mathematical coding of the Quran in 1974, which he called the mathematical miracle of the Quran. Using the Egyptian edition that was written after “Hafs”, the most commonly used version of transmission he presented to the world the proof that this writing of the Quran was not by a mere co-incidence but was divinely guided, and beyond any human power, even with the few human errors seen in its collection.

The proof was strengthened and confirmed by a mathematical structure in the Quran discovered in 1974. That year 1974, which happens to be 1406 Hijri year after the revelation of the Quran (1406 = 19 X 74), was a milestone in proving that the Quran passed down to us in the written and oral form has been preserved and verifiable. This mathematical structure, which is based on number 19 as stated in sura 74 confirmed the accuracy of the transmitted Quran and the re-writing of the Quran, and will always allow the confirmation of any written Quran. It has already played a major role in exposing the “always suspicious” two verses of sura 9 as false.

The source of transmission of the revealed Quran is Muhammad’s own writings and its memorization by many contemporary people. The first writings of Quran after Muhammad that still present today were simple Kufic writing but the first script was developed including diacritic marks (Tashkeel) to the letters around tenth century for facilitating easy reading while sura and verse numbers were added in 1918 (published in 1924) that we see in the modern editions of Quran. The history as stated above also indicates that Quran in all its stages has been part of a bigger plan that will culminate in the unveiling of the mathematical miracle of the Quran. The mathematical miracle confirmed that all the stages were totally under control of God Almighty. However, the mathematical miracle will be with us to the end of time and will be an effective tool in distinguishing a correctly written Quran from one with human errors and will make it possible to have a one standardized edition of the Quran for all.

It is well known that the Kufic script in which the Quran was originally written contained no indication of vowels or diacritical points. This resulted in variant readings of the Quran. The way in which the Quran was recited by each of the readers was formerly recorded in textual form. This resulted in the presence of many transmissions, and accordingly the Quran (Mus-haf) was written differently in different areas. We know however that the Quran given to Muhammad was in one form, which means all the various transmissions only represent the different readers and do not necessarily represent the Quran revealed to prophet Muhammad and preserved in Master Tablets at God Almighty.

There are various versions of the Arabic Quran that are still in print. They differ in many aspects although they convey the same message. God has provided us with the tool to verify the correct version and confirm His preservation of the Quran. The Mathematical miracle of the Quran has proved that the Hafs transmission maintained the built in mathematical structure of the Quran. Thus, the mathematical miracle is Not Only a physical proof that Quran is from God But Also make it possible to have only one standard edition of Quran for the world.
Peaceful Friday, salaam and God bless.
Tafazzal (5/1/2015)