There are 38 instances related to fataha can broadly be classified into the verb (20), noun (16) and participle (2) forms as shown in the table below: The instances have meanings based on their grammatical forms while an Arabic word may have different meanings in different contexts as well. 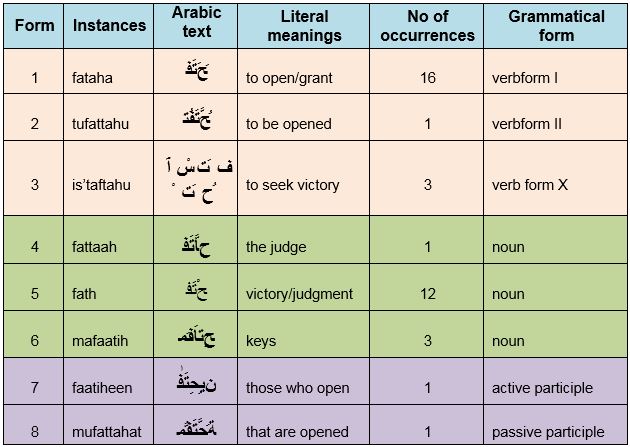 Note: The above table is populated with data obtained from the corpus.quran.com indicating 3 different grammatical groups.

There are 16 instances of fataha in the verb form meaning “to open/grant” in 16 verses across 15 suras are described below:

[2:76] And when they have met those who have believed, they said: “We have believed!”, and when has met some of them to other they said: “Do you inform them of what God has disclosed to you (a-tuhaddithuunahum bimaa fataha allahu `alaykum) that they argue you with it about your Lord? Do you then not understand?”

[7:89] “Certainly, we would have fabricated a lie about God if we have returned to your religion after when God has saved us from it; and it would not be for us that we return in it except God our Lord wills. Our Lord has encompassed everything with knowledge. Upon God we put trust. Our Lord, open between us and between our people with the truth (rabbanaa if’tah baynanaa wa-bayna qawminaa bil-haqqi), and you are best of the Opener.”

[7:96] And if that the cities’ people had believed and feared; certainly, we would have opened for them blessings from the sky and the land (la’fatahnaa `alayhim barakaatin mina al-samaa-i wal-ardi); but they had denied, so we have seized them for what they have done to earn.

[15:14] And if we have opened for them a gate of the sky (wa-lam fatahnaa `alayhim baaban mina al-samaa-i), then they have continued to ascend therein.

[21:96] Until when has been opened Gog and Magog (hattaa idhaa futihat yajuuju wa-majuuju), and they will descend from every elevation.

[34:26] Say: “Our Lord will gather of ourselves, then He will judge between ourselves with the truth (thumma yaf’tahu baynanaa bil-haqqi). And He is the Judge, the Knower.”

[39:71] And has been driven those who have disbelieved to Hell in groups until when they have reached it, has been opened its gates (futihat abwaabuhaa), and has said its guards to them, “Did not come to you messengers from among you, who recite to you of your Lord revelations and warn you of this meeting of your day?” They have said, “Yes but word of the punishment has justified upon the disbelievers.”

[39:73] And has been driven those who have feared their Lord to Paradise in groups until when they have reached it, and has been opened its gates (wa-futihat abwaabuhaa) and has said its guards to them, “Peace be upon you, have been done well by you. So, enter it, are abiding forever.”

There is only 1 instance of tufattahu in the verb form meaning “to be opened” in 1 verse in 1 sura is described below:

[7:40] Indeed, those who have denied our revelations and have been arrogant towards them, will not be opened for them gates of the sky (laa-tufattahu lahum abwaaba al-samaa-i), nor will they enter the Paradise until the camel can pass through an eye of the needle. Thus that we recompense the criminals.

There are 3 instances of is’tafttahu in the verb form meaning “to seek victory” in 3 verses across 3 suras are described below:

[8:19] If you (disbelievers) seek victory (in tastaftihuu), then certainly, has come to you the victory. And if you refrain, then it is better for you, and if you return, then we will return, and your force will not help from you even if it has outnumbered. And that God is with the believers.

There is only 1 instance of fattaah in the noun form meaning “the judge” in 1 verse in 1 sura is described below:

[34:26] Say: “Our Lord will gather of ourselves, then He will judge between ourselves with the truth. And He is the Judge, the Knower (wa-huwa al-fataahu al-`aleemu).”

There are 12 instances of fath in the noun form meaning “victory/judgment” in 12verses across 9 suras are described below:

[4:141] Those who wait with you, then if it has been for you a victory from God (fa-in kaana lakum fathun mina allahi), they said: “Were we not with you?” And if it has been for the disbelievers a turn, they said: “Did we not side with you and protect you from the believers?” While God will judge between you on a day of the Resurrection, and God will not give a success over the believers.

[5:52] So you see those, there are a disease in their hearts hasten to them (the disbelieving Jews and Christians), saying: “We fear that a disaster befalls us!” While it has been that God brings with the victory (fa-`asaa allahu an yatiya bil-fathi) or a decree from Himself, then they become regretful for what they had concealed within themselves.

[8:19] If you seek victory, then certainly, has come to you the victory (fa-qad jaa-akumu al-fathu). And if you refrain, then it is better for you, and if you return, then we will return, and your force will not help from you even if it has outnumbered. And that God is with the believers.

[26:118] “So open between me (Noah) and them judgment (wa-baynahum fathan), and save me and whoever is with me of the believers.”

[32:29] Say: “A day of the judgment (yawma al-fathi) will not benefit those who have disbelieved in their faith, nor will they be given respite.”

[48:1] Indeed, we have given to you a clear victory (fathan mubeenan).

[48:18] God has been pleased with the believers when they pledge allegiance to you (prophet) under the tree. As He has known what is in their hearts, so He has sent down the tranquility upon them, and has rewarded them a near victory (wa-athaabahum fathan qareeban).

[48:27] Certainly, God has fulfilled His messenger’s vision with the truth: “Certainly, you will enter the Sacred Masjid, God willing, secure, are having shaved your heads and shortened without fearing.” Thus, He has known what you do not know, while He has made other than that a near victory (fa-ja`ala min duuni dhaalika fathan qareeban).

[57:10] And what is for you that you do not spend in the cause of God, while to God is heritage of the heavens and the earth? It does not equal of you who has spent before the victory and has fought (man anfaqa min qabli al-fathi wa-qaatala). Those are greater in rank than those who have spent after that and have fought. And to each, God has promised the best, and God is Cognizant of what you do.

[61:13] And another you love that a help from God and near victory (wa-ukh’raa tuhibbuunahaa nasrun mina allahi wa-fathun); and you shall give good news to the believers.

There are 3 instances of mafaatih in the noun form meaning “keys” in 3 verses across 3 suras are described below:

[6:59] And with Him are keys of the unseen (wa-`indahu mafaatihu al-ghaybi), none knows them except He. And He knows what is in the land and in the sea; and a leaf does not fall except He knows it, nor a seed in the darknesses of the earth, nor is it moist or dry except is in a clear record.

[28:76] Indeed, Qarun has been from Moses’ people that he has oppressed upon them. And we have given him of the treasures, which is indeed its keys certainly burden with a company possessors of great strength (maa inna mafaatihahu la’tanuu-u bil-`usbati ulee al-quwati). When his people said to him: “You do not exult, indeed, God does not like the exultation.”

There is only 1 instance of faatiheen in the active participle form meaning “opener” in 1 verse in 1 sura is described below:

[7:89] “Certainly, we would have fabricated a lie about God if we have returned to your religion after when God has saved us from it; and it would not be for us that we return in it except God our Lord wills. Our Lord has encompassed everything with knowledge. Upon God we put trust. Our Lord, open between us and between our people with the truth, and you are a best of the Opener (wa-anta khayru al-faatiheena).”

There is only 1 instance of mufattahat in the passive participle form meaning “that are opened” in 1 verse in 1 sura is described below:


The review may help us to reflect that God is the Judge and the Wise, and He will judge between us with the truth. He is the best Opener, who opens gates for both fortune and misfortune for us while victory only comes through Him as and when He grants it. Thus, whatever happens in the universe and to ourselves does not happen except His knowledge, even a leaf does not fall without His knowledge. The disbelievers will enter Hell in throngs as He has made it difficult for them to enter the Paradise like passing of a camel through an eye of the needle while the righteous will enter the Paradise in throngs being greeted by its guards. However, the world will not come to an end until Gog and Magog are opened to descend from every elevation, which is a sign yet to come before the end of the world while many of signs for this event have already been fulfilled if we can reflect to them. We may also reflect to the naming of Sura 1: الفاتحة (Al-Faatihah) as God has not chosen a word from its content to name it like other suras of the Quran having 7 letters in its spelling and 7 verses of sura, and 7 is a very significant number at God making it very special for us as our gate opener to the Paradise.
Peaceful Friday, salaam and God bless.
Tafazzal (7/31/2020).