Practices of Islam established with Abraham

The practice of Salat as decreed for the Muslims from the time of prophet Abraham has been corrupted in many ways over the period of time while God has blessed us to find the correct method of it from the Quran, the final edition of God’s scripture (33:40) as well as a guidance for the righteous (2:2) and the reminder for the world (12:104, 38:87, 68:52 and 81:27). But it is unfortunate that millions of Muslims around the globe are heedless to the fact to do it right way for their own good just arguing that they do not see a set of detailed instructions in the method from the Quran while they fail to reflect that the practice is very old. Since the practice of Salat existed long before the revelation of the Quran, the Quran only deals with where there were updates such as the voice of tone during the prayer (17:110) and the clarification needed such as the steps of ablution (5:6) and what nullifies ablution (4:43).

Note: The references found in the Quran in connection with the foundations of the ancient shrine (Ka’ba) by Abraham together with Ismail, the prayers of Abraham, the covenant with the children of Israel, the practices of the messengers including Muhammad and the righteous after Abraham, and the updates of certain practices bear sufficient proofs that the practices of Islam existed, long before the revelation of the Quran.

Day of the Judgment

The Quran has given us all the details about the judgment and the Day of the Judgment in a small set of simple and straightforward verses, even with minimum Arabic knowledge someone can confirm every piece of information going through the relevant verses in the Arabic Quran to be sure about it. Hence, all of us should prepare for the day if we believe in God being certain about the Hereafter expecting something good from Him as Abraham did as well as to avoid any miserable situation on that day.

Note: We may reflect to the facts that (1) we appreciate God focusing on 4 of His attributes: (a) the Lord of the universe, (b) the Most Gracious, (c) the Most Merciful and (d) Master of the Day of Judgment given in our specific words (sura al-Fatehah) that we recite 17 times in our daily 5 times prayer to guide us to the straight path, (2) 13 words of sura al-Fatehah are recited upon completion of the word, al-deen in the verse 4 (1:4) and (3) there is a clear indication that Salat, the prime source of nourishing our souls has a direct relationship, specially the sura al-Fatehah with the Day of Judgment.

God’s religion as defined in the Quran 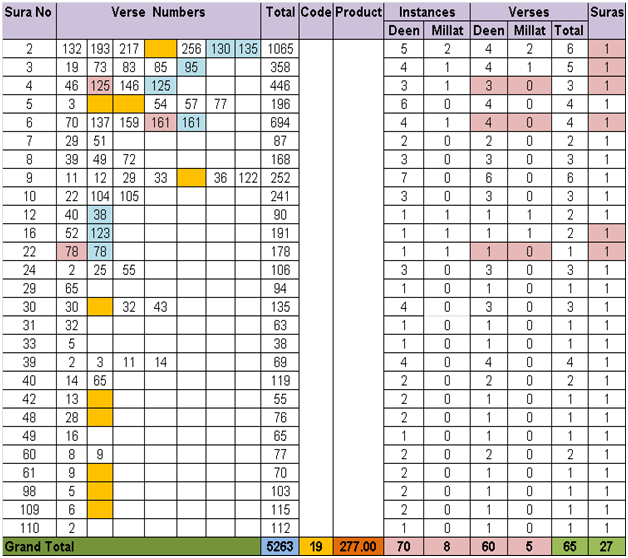 Note: Quran teaches us that people are given religion stating it ‘submission to God’ (4:125) what they should practice being sincere, devoted it to Him (39:11,39:14 and 40:14) to receive their full recompose on the Day of Judgment (16:52), the day there is no doubt about it (51:6). Thus, the judgment and the religion are closely related that has reflected in the sura Fatehah, while both are clearly explained in the Quran with an opportunity to mathematically confirm using the tool given by God in the Quran (74:30). However, God has used 2 Arabic words in the Quran, “deen” that refers to His given religion and “millat” that refers to its practice by the people, to precisely point to the right religion for us to choose for leading a righteous life to deserve recompense on that day.

Praise be to God

The instances of “Praise be to God” in the Quran confirm that God deserves all our praises being the Creator of the heavens and the earth as well as the Lord of the universe. He is the One who deserves all our praises in our earthly as well as in the heavenly life awaiting us while all of us do not praise Him and even, many of us who praise Him are not praising Him to be guided to Paradise. 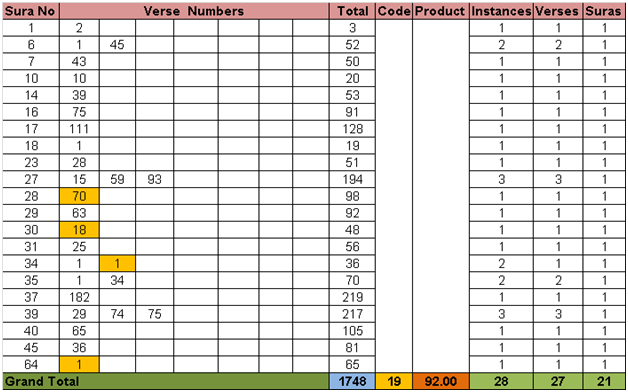 Note: The verse 39:75 (glorifying with praise of their Lord – (yusabbihoona bihamdi rabbihim) provides evidence to have the correct recitation when we return to standing position from bowing (samee-‘a allahu liman hamidah) while the verse 28:70 (He is God, there is no god but He – wa-huwa allahu laa-ilaaha illaa huwa) provides evidence to have the correct recitation in our sitting position (ash-hadu an laa-ilaaha illaa allah wahdahu laa-shareeka lah) known as tashahud to dedicate our prayer to God being owner of all our praise and prayer.
i
Glory be to God

The instances of “Glory be to God” assert us to realize that He deserves all our admiration being the Creator of the heavens and the earth as well as the Lord of the universe. He is the One who deserves all our glorification in our earthly as well as in the heavenly life awaiting us while all of us do not glorify Him and even, many of us who glorify Him are not glorifying Him as He should be glorified realizing that He is too High above what are attributed to Him to be His sons and daughters as well as anything or anyone what are associated with Him to be His partners. However, it has been found that these instances have direct reflection on the recitation of the Salat prayer: (1) at bowing (sub’haana rabbi al-azeem) to glorify His greatness, (2) at prostration (sub’haana rabbi al-`alaa) to glorify His highness, (3) at sitting (ash-hadu an laa-ilaaha illaa allah wahdahu laa-shareeka lah) to dedicate our prayer to Him as only owner of all our praise and prayer and (4) to end the prayer (as’salaamu `alaykum) wishing the Peace of God to all the true believers on the earth. Hence, we must make our all efforts to disregard what are attributed to the Creator of the heavens and the earth as well as what are associated with the Lord of the universe to avoid misunderstanding and idol worshiping. 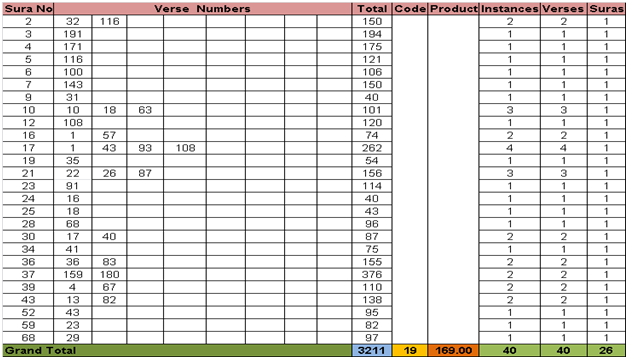 Relationship between specific words and the words of guidance

God has prescribed 50 words for us to observe Salat reciting at 7 positions. Fatehah consists of 28 words in 7 verses that are recited at standing position while there are also 22 words that are recited at 6 other positions from the words of guidance to observe the Salat in a right way. Thus, the words in all the recitation are made fit as our prayer, is an indication that Salat is especially designed.

Note: ‘Praise be to God, Lord of the universe’ has been repeated 7 times in the Quran and the verse 10:10 reflects that our prayer is in ‘Glory be to God’ as well as in ‘Praise be to God’. ‘In the Name of God, the Most Gracious, the Most Merciful’ has been repeated twice in the Quran (1:1 and 27:30) while the verses, (20:14 and 29:45) state the purpose of our prayer has a close relationship with the specific words given by God being the Children of Adam as indicated in (2:37).

Quran provides sufficient proofs to detect that there is infiltration of corruptions and distortions in the practice of Salat as it is observed by the majority Muslims all over the world including its recitation at different positions during the prayer. Some distortions are easily detectable based on the purpose of Salat as explained in the Quran. It is clear from it that Salat is not designed for us to ask God for our health, wealth, provision or well-being of anyone in the Salat prayer but to remember Him and appreciate Him asking His favor to guide us to the straight path being extremely submissive to Him.

Although a set of detailed instructions that many of us may expect for their ignorance, is not in the Quran but it has appropriate details to understand the corruptions as made to the recitation and other aspects of Salat down the generations. God is aware that we would be in such a situation, and He has provided us a means in the Quran even to physically confirm the correct method to observe Salat eliminating all corruptions and distortions to be guided to Paradise. Thus, the mathematical coding of the Quran (74:30-37), and the reminder for the humans has been unveiled through His messenger when the humanity really needs it to way out of all misinterpretations, corruptions and distortions from our beliefs and practices (27:82). This reminder is a blessing from God for the scientifically and technologically advanced community for accurate interpretation of His teachings and laws, and confirming practices, commandments and crucial events to have them done right way.

However, we may reflect to the above analyses supported by the mathematical confirmations that the contact prayer (Salat) is especially designed, which can be captured from the pattern given in the Quran, even the correct recitation at sitting can be confirmed exposing the most corrupted recitation at the position with both “Praise be to God” and “Glory be to God”, is an opportunity for us for detecting and removing all corruptions from Salat to observe it reciting the right words avoiding idol worship. If we can understand that we are on the earth to take the fit test while all the answers are given in the Quran by re-educating ourselves to see the facts from the appropriate details in the Quran to observe Salat and to do other rites right way, we may expect our return to the right place.
Peaceful Friday, salaam and God bless.
Tafazzal (8/18/2017).